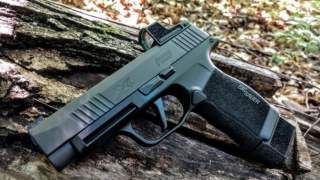 Key point: SIGs decision to only offer a larger version of the P365 with “X-series” features probably is a reflection of the consumer market’s new acceptance of features once only considered to be suitable for competition guns: flat-faced triggers, red dot optics, and “enhanced” grips have all entered the mainstream of pistol design.

“X”-tended versions of compact handguns appear to be the new hot trend in the gun industry. (Although the “X” in the Glock 19X and 43X technically means “crossover”—i.e., a full-size grip on a compact slide, not “extended.”) Sig Sauer also appears to have embraced the trend with a larger version of the P365, the P365XL, which also features a longer grip and slide.

But in the extended P365, Sig Sauer treads on the toes of another pistol in its own product line, the P320 Compact. Comparing the official specification sheets of both pistols, the P365XL is slightly smaller than the P320 Compact. The length and barrel length are very similar, but the P365XL is thinner and has a shorter grip. Moreover, because of the shorter grip, the P365XL loses three rounds of capacity versus the P320, assuming both are using flush fit magazines.

The P365XL is also significantly thinner than the P320 Compact. Following the success of the single stack Glock 43, 43X, and 48, SIG also embraced thinness with the P365, which is 1/5 of an inch thinner than the P320 Compact and Subcompact. While thicker grips can reduce recoil by spreading the rearward force across the palm of a shooter’s hand, a thick and short grip can feel awkward in hand. Thinner pistols are also easier to conceal. As a result, the success of the G43X suggests that thin and longer is the winning combination for a concealed carry pistol.

But the P365XL also adds an optics cut to the top of the slide. With pistol red dots seeing more and more use, even on concealed carry guns, the cut makes it an attractive option for someone who might be looking to mount a red dot on a carry gun. The P320 Compact also comes in an optics-ready version in the P320 RX Compact, but the design of the optics cut differs. The P320 RX’s design is more conservative, placing the red dot in front of the built-in rear sight. Furthermore, the P365XL’s rear sight is integrated into the “optic” plate—the plate is put in the slide to fill in the cut when an optic is not attached. Removing the plate removes the rear sight.

Another variant of the P320 Compact, the P320 XCompact, also comes with an optics plate with an attached rear sight. The reason for attaching the rear sights to the optics plate on the XCompact is that the optics cut is longer to be compatible with the SIG Romeo 1 Pro, Romeo 2, and Leupold DeltaPoint red dots. However, the P320 RX Compact is only compatible with the SIG Romeo 1, which has a mixed reputation for reliability.

The selection of the XCompact style plate on the P365XL suggests that the longer, no rear sight cut has been more popular with buyers. However, the possible lack of rear sights may cause problems for some pistol red dot training programs. Some trainers recommend retaining the iron sights at a height where they can be seen through the red dot’s glass as “training wheels” to train rapid acquisition of the dot when presenting the pistol.

True to the “X” in its name, P365XL also integrates ergonomic features that were seen before on “X-Carry” variants of the P320 (which includes the P320 XCompact): the flat faced X-series trigger and the X-series “grip,” which features a more pronounced undercut under the trigger guard and an extended beavertail.

SIGs decision to only offer a larger version of the P365 with “X-series” features probably is a reflection of the consumer market’s new acceptance of features once only considered to be suitable for competition guns: flat-faced triggers, red dot optics, and “enhanced” grips have all entered the mainstream of pistol design.

Charlie Gao studied political and computer science at Grinnell College and is a frequent commentator on defense and national security issues. (This first appeared in June 2019.)