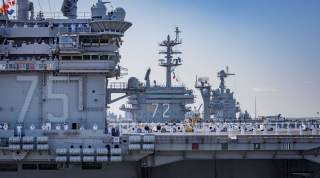 - Readiness assessments: Loaded staffs and nearly 300 serving admirals and yet Big Navy just slept through it all. I was taught as an ensign that an officer’s job is to set standards and see that they’re met. When was that formula set aside?

- Training in the surface navy: It is stunningly inadequate. And the training pipeline for officers? Even with planned upgrades, it’s far too short when benchmarked against what submariners and aviators have to go through to be considered qualified and ready to do their job.

- Watch qualifications: Are you kidding me — a deployed ship operating in crowded waters had to borrow helmsmen?’ And their unfamiliarity with their new ship’s steering system led to the ship’s collision?

- The mismatch between ships and sailors: Either simplify ship designs or upgrade the skills of their sailors so they are masters of the technology.

- Putting careers ahead of Navy needs: Now the best surface-warfare officers go to the safest jobs — the toughest jobs are filled by those least able to handle them. The surface navy eats its young.

-Ignoring symptoms and solutions: Ten years ago, surface ship readiness was bad enough that Admiral John Harvey, then Commander Fleet Forces, commissioned the Balisle Study to figure out what was wrong. It did. And died.

-Priorities and investment strategy: Build fewer ships and put the money into better crews. Hull count is not the primary readiness metric.

-Isolation and inbreeding: The surface navy lives in a stovepipe. It needs to find some humility and go ask the submarine force and naval aviation how they operate safely and skillfully in environments far more challenging than the surface of the sea.

- A narrow search for answers: We have the lame leading the blind, the Navy’s major study of the problem staffed almost entirely by people from the troubled area being studied. The situation demands a parallel and complimentary review by objective outsiders. Best way to get that? Push passage of the McCain-Wicker Surface Warfare Enhancement Act of 2018. And bring in some experts from the world of industrial/organizational psychology — these folks are really good at analyzing and fixing broken cultures.

Retired Navy Capt. John Byron is qualified in surface warfare and in submarines. He served in five submarines, commanding the submarine Gudgeon. He is a plank-owner of the cruiser Fox.