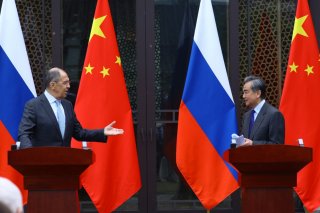 The likelihood of a Sino-Russian alliance has lately been under intensifying speculation. Not the least because Russian president Vladimir Putin himself stated in the Valdai Club meeting last December that an alliance with China should not be ruled out. Chinese leaders have offered similarly ambivalent remarks, giving an impression that a true military alliance might be in the works.

Many scholars have argued, on the other hand, that such an alliance is only rhetorical or based on interests that are inherently incompatible. But perhaps focusing on a formal alliance is beside the point, since the existing China-Russia relations already bear important systemic effects notwithstanding any formal commitments between the two states. These effects could cause China and Russia to function akin to a de facto military alliance, and would, of course, have the greatest impact on the United States and its allies.

China and Russia, meanwhile, both face unsolved security challenges in their peripheral regions. China has its maritime territorial disputes in the South and the East-China seas, and the unfinished “reunification” with Taiwan, while Russia feels threatened by the presence of NATO in its Western regions. In their regional security challenges, China and Russia are facing the same major opponent, the United States.

The three great powers are, thus, bound to each other through Eurasian geography and through all dimensions of human action. Their cooperation, alliances, and competition form a geographically interconnected Eurasian system, and any action by one of the three players has repercussions in other domains or geographical locations.

Sometimes, the interactions between, for example, China and the United States create opportunities for Russia to pursue its interests. A military escalation with China in Asia would seriously tie down U.S. forces, but provide freedom of maneuver in the corresponding other end of the Eurasian continent for Russia. And vice versa.

Furthermore, besides exploiting opening gaps in their regions as U.S. forces are tied elsewhere, China and Russia could provide each other strategic support by increasing pressure in their own regions in various different ways. Such support could happen short of any formal alliance and could be totally unrelated to the ongoing conflict.

Let us first imagine an East Asian escalation. Although neither the United States nor China are looking for a fight, it is unfortunately all too easy to imagine a rapidly developing conflict around the Taiwan strait or the East or South China seas, perhaps ignited by a minor spark such as a collision of patrolling ships or airplanes. In this setting, Russia might either support its strategic partner or try to benefit from the situation in other ways. Often these could be virtually the same thing.

Russia could, for example, draw the attention of NATO and EU countries to their internal or secondary problems through information warfare and cyber-attacks, which would decrease European support for the United States in Asia. Russia could further use its position as Europe’s main gas supplier to pressure individual NATO or EU member states and thus undermine the consensus decision-making in those organizations.

Russia could also tie-down and divert U.S. and NATO military assets in the western end of Eurasia, for example, by staging snap military exercises or by deploying military forces on the borders of neighboring countries. Ultimately, Russia could escalate its activity into a small military conflict, for example, concerning Ukraine or the Baltic sea region, as an opportune land grab might serve the Russian interests even more than the Chinese. On the other end of Eurasia, Russia could use its formidable long-range weapon systems to deny the West freedom of action in Asia, and it could also support Chinese operations through intelligence gathering and sharing.

The conflict might also be brewing in the East Asian end of the Eurasian continent. The already strained NATO/EU-Russia relationship might escalate in a situation where Russia tries to seize some land area in Ukraine, in the Baltics, or elsewhere around the Black Sea. Such escalation would, again, tie U.S. forces down while opening avenues for Chinese advance in the Eastern end of the continent.

China could begin supporting Russia by increasing its pressure against Taiwan through incursions into Taiwanese airspace. Such incursions have increased considerably during 2020, and the Taiwanese Air Force is reportedly already under great strain due to constant identification flights. In addition to airspace, China could intensify its naval exercises around the island, which could eventually be expanded towards a full-blown blockade. Such harassment would be supported by gradually intensifying cyber and information operations.

Pressure could also be increased in the South China Sea, where Chinese grey zone activities using the “maritime militia” (military assets camouflaged as fishing vessels) have been lately gaining momentum. The maritime militia could also be directed against the Japanese governed Senkaku/Diaoyu islands, which the administration of Joe Biden has defined to be included within the bounds of the U.S.-Japan defense treaty.

Finally, China could use the opportunity provided by a European escalation to take a small step towards the “reunification” of Taiwan by occupying one of the Taiwanese governed isolated islands. Pratas Island in the South China Sea, 400 kilometers away from the Taiwanese main island, would make an optimal candidate. Although the island holds a military garrison of c. 500 soldiers, its virtual isolation makes it a suitable target and a testing ground for China’s rapidly developing amphibious capabilities. China could probably accomplish a fait accompli flash annexation before the United States could react, especially if it is preoccupied in the European theater.

Proliferating discussions about whether a Sino-Russian alliance is in the making could be missing the point. Due to the systemic effects discussed above, China and Russia could (and likely would) synchronize their moves against U.S. alliances without any formal treaty in place, either for strategic reciprocity or for pure opportunism. As the United States is the major security concern for both, pinning Washington down in the other end of Eurasia provides freedom of movement at the other end.

In either scenario, the provided freedom of movement doesn’t have to cause the annexation of the Baltic states or Taiwan as a whole, but it could be used for reaching smaller objectives. Smaller moves, such as the flash occupation of Narva, Estonia, or Pratas island, which the United States would not be able to respond promptly, would dramatically impact the credibility of U.S. deterrence for its partners.

In addition to generating popular points through arousing nationalistic sentiment, which both the Chinese and Russian regimes are increasingly in need of, the weakening of deterrence and demonstrating that NATO or U.S. defense commitments to Taiwan are paper tigers would in itself be major strategic victories.

Besides causing systemic effects on both ends of the continent, the Eurasian system also incentivizes China and Russia to support each other. China and Russia have already signaled that they will pat each other’s shoulders if the occasion requires through joint military exercises organized in each other’s hot spots, and through the recently initiated joint air patrols over the Sea of Japan. Is there any reason to believe that such strategic reciprocity would not take more serious forms under a military escalation at either end of the continent?

Chinese-Russian relations and their systemic consequences already exist under a pseudo-alliance with possibly serious consequences that should be taken into consideration, especially as tensions are rising over Ukraine and in the Taiwan Strait.

Matti Puranen is a Special Researcher at the Department of Warfare of the Finnish National Defence University.

Juha Kukkola serves as an officer in the Finnish Defence Forces (FDF).