A Strategic Meltdown Over Ukraine Could Doom Taiwan 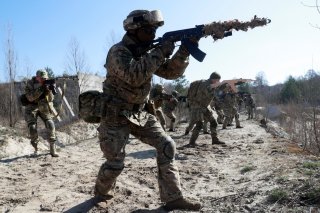 Saber rattling once more is infecting the U.S.-Russia relationship with the Biden administration’s offer of “unwavering“ support for Ukraine against Russia. Several things need to be considered in order to avoid a grand strategic meltdown for the United States that includes losing out to China in Asia.

First and foremost, Russia is a great nuclear power. Currently, is the only nuclear power that can kill tens of millions of Americans in short order. Let that sink in... It is not hyperbole.

A mistake or misinterpretation of intentions could lead to a catastrophic accident between America and Russia. Near misses like the Arkhipov incident during Cuban Missile Crisis, the 1979 NORAD error, the 1983 Petrov incident, even the 1995 Norwegian Rocket Incident show we have narrowly missed nuclear catastrophe numerous times.

Second, the United States, with Europe following along, has long sought to include Ukraine, a nation on Russia’s border, into NATO. This threat is behind a lot of the problems we have had with Russia during the post-Cold War era.

Russia has long considered Ukraine critical to its self-conception, going back to the days of the Kievan Rus. However, state mythology aside, Ukraine is an area of pivotal strategic importance. Not only is access to its Black Sea fleet in Sevastopol (in Crimea) important, but Ukrainian territory was used by the Nazis for part of their invasion of Russia during World War II. This feeds into Russia’s historic sense of insecurity.

Russia has long asserted that any effort for the West to bring Ukraine into its permanent orbit, through European Union or NATO membership, would be considered a major threat. As far back as 2007, at the Munich Security Conference, Russian President Vladimir Putin outlined a position that has changed little in the intervening period of time.

Imagine Russia or China doing this to the United States by establishing a military alliance with Mexico and placing large quantities of their military equipment there. We saw what happened with Khrushchev and Cuba.

It has been a huge strategic error to keep Ukrainian NATO membership a live issue for so many years and in the face of shifting geopolitical winds.

Second, by confronting Russia over Ukraine, we leave ourselves exposed to Chinese aggressions elsewhere. Getting bogged down in Europe would afford China an excellent opportunity to exploit our distraction. Already, many of our military leaders fear a Chinese invasion of Taiwan.

Given China’s rise in the economically essential East Asia, its growing clout and constantly improving military, it is reasonable to conclude this is a more essential challenge for the United States than anything Russia is doing.

Further, East Asia represents the locus of the future balance of global power and is thus an arena of far greater strategic concern than Ukraine. If China is able to create a situation where it has a de facto veto over U.S. actions in the East and South China Seas, something a seizure of Taiwan would go a long way to consolidating, it will have secured for itself a Sino-centric order. This will have far more calamitous long-term economic fall out for the United States than the status of Ukraine.

This is all very dangerous and requires sober assessments by U.S. leaders. However, instead of sober assessments, we get President Joe Biden calling Putin a “killer“ and offering a possible blank check to Ukraine for their own military adventurism similar to what happened in the George W. Bush administration over Georgia in 2008.

American grand strategy should be avoiding the rise of any Eurasian hegemonic power or concert of powers. A Sino-Russian axis is already becoming America’s ultimate geopolitical nightmare. China’s long-standing Belt and Road Initiative is already knitting Eurasia together under Beijing’s economic clout as has been illustrated most recently with the China-Iran deal. Allowing China a freer hand to consolidate its Asian gains will only exacerbate this nightmare and would be an example of failed grand strategy.

Total strategic coherence is probably not attainable, but we should demand something better than the simplistic, moralistic, and ultimately naive thinking on display in Washington, DC right now. Our leaders risk sleepwalking into a grand strategic meltdown that they may not be able to fix.

Greg R. Lawson is a contributing analyst for Wikistrat.