Six Reasons Why the Taliban Flattened the Afghan Government 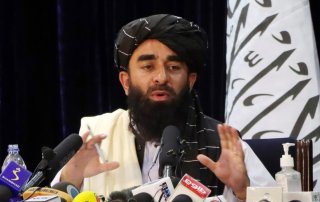 Afghanistan is a region manifested with enormous pitfalls. The graveyard of empires has become a graveyard of peace, stability, and freedom too. As the United States withdrew its forces, the Taliban took complete control of almost the whole country without facing any resistance. The outcome of twenty years of American involvement did not enable the Afghan government to stand on its own feet for even a few weeks. What went wrong is a question worth probing.

President Joe Biden’s hasty withdrawal from Afghanistan has enabled the Taliban’s fighters to conquer province after province within a few days. Twenty years of state-building collapsed in a matter of days, although Biden disagrees with the mantra of nation-building and blames the collapse of Kabul on Afghan leaders whom the United States had nurtured all those years. The Afghan army did not resist the Taliban's advance and gave up arms while President Ashraf Ghani fled the country.

The flawed U.S. strategy resulting in the fall of Kabul provides a key lesson: nations develop from within. The United States had kept Afghanistan on a ventilator and maintained a relative peace by providing the Northern Alliance with external help. A critical analysis of the past twenty years can help understand where America went wrong in Afghanistan.

First, giving birth to the Mujahideen during the Cold War and expecting to dispose of them later was a major strategic miscalculation. The Taliban established a government in Afghanistan in 1996. By the end of 2001, after the 9/11 attacks, the United States invaded Afghanistan in a bid to hunt the perpetrators. The Afghan Taliban were not directly involved in that unfortunate incident; however, they were providing refuge to Al Qaeda, including Osama bin Laden. Americans came, conquered, and got stuck in a long and bloody slog. Frankenstein's monster then got out of control and bin Laden and others, who were once a strategic asset, became the United States’ biggest enemies.

Second, once the United States was already involved in Afghanistan, it invaded Iraq in 2003 and diverted its attention from one place to another based on two false charges—the existence of weapons of mass destruction and Saddam Hussain’s links with Al-Qaeda. An ambitious foreign policy made America lose international standing as the United States invaded Iraq without the backing of the international community. Afghanistan was a hard enough place to do a foreign adventure, but the United States added Iraq into the bargain. Handling two hard conflicts simultaneously without a long-term strategy was a failure in itself.

Third, spending two decades just to keep things moving without developing institutions in Afghanistan was bound to make it structurally weak. Those years were lost in utter shame. The war in Afghanistan cost America nearly $300 million dollars every day for two decades. With an Afghan population of 40 million, it equals roughly $50,000 for each citizen. Yet, 90 percent of the Afghan population is living under $2 a day. An economy being run on foreign aid to maintain temporary stability was inevitable to fall. Institutions could not be developed, leaving only turmoil in their absence.

Fourth, the government of Afghanistan itself allegedly lacked legitimacy. According to Peter Galbraith, a former deputy UN envoy to Afghanistan, Ghani’s two terms and Hamid Karzai’s presidency were a result of fraudulent elections. A government that is undemocratic and needs foreign backing is not able to stand against militants when external support vanishes. The officials are also alleged of engaging in extensive corruption.

Fifth, the U.S. withdrawal strategy did not consider the probable refugee crisis which has emerged now. People from Afghanistan are migrating to other countries. Unstable regions also have brain drain. As the cream of the crop leaves a nation, the remaining population becomes hollow in intellectual strength. Socio-economic problems become an unfortunate destiny of the downtrodden.

Sixth, withdrawing without reaching an acceptable peace deal for governing Afghanistan was a major reason why the Afghan army disintegrated and couldn’t hold its positions. When America was in Afghanistan, even then government in Kabul could hardly govern half of Afghanistan.

After the Taliban conquered Afghanistan, other militant outfits in different countries will likely gain confidence and might pose a threat to the security of different nations. But the Taliban’s rule is just beginning. Seizing a country and governing it are two different things: we have yet to see how it runs the state. Apparently, it has told the world of opening the society a bit more than its last rule. It has approved the functioning of media, though with limitations. It has also shown openness to women’s education up to the university level and allowing them to work, albeit in conditions defined by the Taliban. However, there is skepticism that the Taliban is just manipulating the world by pretending to be a “changed Taliban” to get official recognition from different states. The role of neighboring countries, including regional powers such as China and Russia, in influencing the Taliban will be crucial. Regardless, America is certain to lose international standing as it returns Afghanistan to the Taliban twenty years after taking it from them.