A Slow Death? The Royal Air Force Only Has 119 Fighters 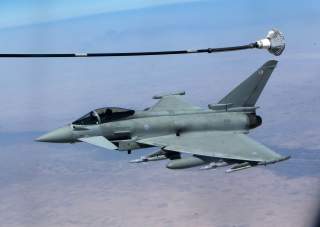 Key point: London hasn't been funding more fighters for a while and it will take time to rebuild the fleet.

The Royal Air Force in mid-2019 operates just 119 fighters, the lowest number in its history.

The RAF’s F-35Bs flew in combat for the first time on June 16, 2019. Taking off from the British air base at Akrotiri in Cyprus, a pair of the vertical-landing stealth fighters patrolled over Syria alongside RAF Typhoon fighters, the U.K. Defense Ministry announced.

The air force has deployed six F-35s to Cyprus for operations over Syria and Iraq alongside a similar number of Typhoons. Eight RAF F-35s are in the United States for training and development, leaving the air force with just three spare F-35s.

“While there is some validation to the argument that, because the Tranche 2 and 3A Typhoons and the F-35Bs are more capable aircraft than those that came before them, fewer will be needed, it is also very true that no aircraft, no matter how capable, can be in more than one place at any time,” Jane's aviation editor Gareth Jennings told Daily Mail.

Plans are in place to begin growing the fighter force. The RAF is standing up two additional Typhoon squadrons and equipping them with around 24 early-model Tranche 1 Typhoons that the service recently withdrew from front-line operations in favor of more-capable Tranche 2 and Tranche 3A models.

Likewise, the defense ministry insists it ultimately will buy 138 F-35s for the RAF through the 2020s. The first RAF F-35 squadron stood up in 2018. If the RAF keeps in service all 126 Typhoons and completes the F-35 buy, it could operate as many as 264 fighters around a decade from now.

In fact, the early-model Typhoons might not serve very long. And the F-35 purchase could end up being much smaller than the official requirement.

With just 119 fighters, the RAF realistically can deploy around 40 at a time. As a general rule, just a third of major military forces of any given type usually are available for combat, while the rest are busy with training and maintenance. The RAF fighter fleet also handles domestic air-defense duties.

Forty fighters can’t stretch very far. In addition to deployments to land bases for operations like those over Syria and Iraq, the RAF also manages shipboard F-35 deployments on behalf of the Royal Navy.

Each of the navy’s two Queen Elizabeth-class carriers has space for around 40 fighters. For the foreseeable future, it’s unlikely the RAF will have the capacity simultaneously to embark fighters on both carriers. It’s not for no reason that the Royal Navy plans to embark on its carriers contingents of U.S. Marine Corps F-35s.

The RAF isn’t the only air force struggling to maintain a viable fighter fleet. In early 2019 the Swiss air force was down to just 10 ready fighters with full-time pilots.

Belgium meanwhile is buying 34 F-35s for $4 billion to replace 56 F-16s. The Belgian air force expects just five F-35s to be deployable at any given time. The RAF remains a bigger and more powerful force than the Belgian air force is. But only barely.