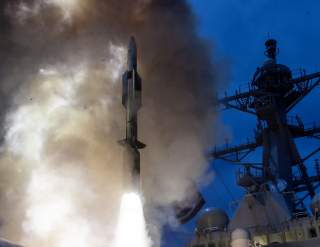 Key point: Using the SM-6 as an offensive weapon against surface targets is a new application for the Navy, bringing another kind of surface fire-power to the fleet.

The Navy is preparing an emerging Standard Missile 6 missile variant for combat by test-firing the weapon engineered with upgraded software - enabling it to perform a range of functions to include air-warfare, ballistic missile terminal defense and anti-surface warfare capabilities, service officials said.

The Navy successfully executed four flight tests of the surface-to-air Standard Missile-6 Block I (SM-6 Blk I) off the Hawaiian coast between April 6 and 13. The test marks a key step along the way to delivering a combat-ready weapon to Navy ships.

"I'm very proud of my team for the seamless planning and execution of these flight tests, which are the culmination of disciplined systems engineering efforts.  These latest flight test successes demonstrate once again the versatile capability of SM-6 Blk I," Capt. Michael Ladner, major program manager for Surface Ship Weapons, Program Executive Office for Integrated Warfare Systems, said in a written statement from Naval Sea Systems Command.

Using an "active seeker" technology, two SM-6 missiles were able to simultaneously track and destroy a single target, greatly improving the probability of a target kill.

"You now have absolute assurance of hit no matter what the threat is doing. If the threat takes a turn and does some strange maneuver and the first missile is unable to sense it and engage it, the second missile will," Mike Campisi, SM-6 Senior Director, Raytheon, told Scout Warrior in an interview.

A statement from the Missile Defense Agency described how a Navy destroyer "fired a salvo of two SM-6 Dual I missiles against a complex medium-range ballistic missile target, demonstrating the Sea Based Terminal endo-atmospheric defensive capability."

The SM-6 is unique in several respects; the weapon uses what is called an "active" seeker, meaning it can send a signal or electromagnetic ping forward in addition to receiving them. Electromagnetic signals, which travel at the speed of light, send a signal forward before analyzing the return signal to determine the shape, size, speed or configuration of an approaching threat. Since the speed of light is known, and the time of travel is able to be determined, a computer algorithm is able to calculate the exact distance of an object. This technology is built into the SM-6, using software upgrades.

An "active seeker" gives the missile to better attack maneuvering or moving targets at sea, because it is not wholly dependent upon a ship-based illuminator to bounce a signal off a target for a merely "passive" seeker to receive.

This is the technology which allows a ship commander to fire several SM-6 missiles in more rapid succession or closer to one another in the event that a target needs to be attacked with more than one missile.

"A ship can illuminate or communicate with the missile -- and at the same time the missile is looking at the target as well. On a pure active mode it can go on its own," Campisi explained.

Now, SM-6 "active seeker" technology allows the missile to use its own built-in seeker technology to navigate without needing a ship-based illuminator.

Compared with the SM-3, the ship-fired SM-6 interceptor is designed to track and destroy lower-altitude threats such as a ballistic missile in the "terminal" phase of decent to its target.

The weapon has been established with an ability to knock out ballistic missiles approaching from the sky. More recently, the weapon has been developed for a number of new "offensive" missions including surface attacks against enemy ships or defensive intercepts against anti-ship missiles closer to the surface.

The SM-6 has also been capable of anti-air defense, equipped with an ability to attack or destroy enemy helicopters, drones and other approaching threats.  The weapon has now been established as defensive, offensive and capable of three distinct missions; they are surface warfare, anti-air warfare and ballistic missile defense.

“You now have a multi-mission capability with one missile. That means that this missile could be moved at any ship at any time and have the exact same capability all three mission sets, that isn’t set by hardware or anything else,” Campisi.

Campisi and Navy leaders emphasize that the fast-changing threat environment means new offensive and defensive technologies need to emerge in order for the US to maintain its edge over potential near-peer rivals. Along these lines, Russian and Chinese missile modernization is by no means lost on US weapons developers.

This most recent development comes on the heels of a successful test last year where an SM-6 destroyed and sank a surface ship target off the coast of Hawaii, providing additional strategic relevance for a new offensive use of a missile previous oriented toward air and ballistic missile defense, Raytheon and Navy officials said.

"The anti-surface warfare test proved that SM-6 could attack a surface ship. It destroyed a Perry-class fast Frigate. The big deal for us is that the SM-6 proved its capability with sea targets," Campisi said.

The test, which took place at Pacific Missile Range Facility, Hawaii, involved the rare event of actual destruction and sinking of a decommissioned or retired Navy ship.

In this instance he firing of the SM-6 was designed to analyze new software configurations on the missile, giving it an ability to track and destroy targets on the surface of the water - as opposed to its typical use of hitting or intercepting incoming enemy fire from the air above a ship or near the earth's atmosphere as a ballistic missile defense weapon.

Using the SM-6 as an offensive weapon against surface targets is a new application for the Navy, bringing another kind of surface fire-power to the fleet. The SM-6 is larger than the SM-3 interceptor and is designed to destroy closer-in air targets. However, this test launches the ability for the SM-6 to function in an additional capacity as an offensive weapon against a wide range of surface targets.

"The entire system was tested. It performed exactly as we expected and the result more than met our expectations. We added to the sea-based terminal capability (ballistic missile defense) and anti-air defense," Campisi added. "In effect, this will allow the fleet to attack ships with offensive capability and prove out the flip side of area defense -- which is distributed lethality."