Small And Powerful: These 5 Bullpup Rifles Are The World's Best 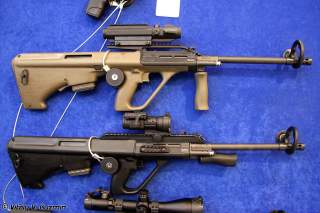 Key Point: The bullpup market has exploded in popularity.

What if I told you there are modern rifles that feature a full-length barrel, firing a standard rifle round, but they are the same size as a short-barreled rifle?

If you think that sounds like an excellent idea, then you may be the perfect candidate for a bullpup rifle. A bullpup rifle can do all the above in a lightweight, easy handling package.

The bullpup market has exploded in popularity. Quite a few countries have adopted the bullpup platform as their chosen service rifle. Even the United States Secret Service adopted a bullpup for use with the Presidential Protection detail.

What is the best bullpup rifle? That’s a hard question to answer because there are so many bullpups out there and they are designed for so many different purposes.

It’s impossible to choose just one, so we are going to look at the Top 5 Best Bullpup Rifles. Each rifle on the list will cover a specific purpose.

I don’t want to get too ahead of myself here. Some of you maybe wanting me to pump the brakes and actually explain what I’m talking about. This is Gun News Daily, and I’m using the word bullpup like it’s Puppy News Daily.

A Bullpup is not an actual pup, but a specific type of layout of a rifle. Bullpups can be rifles, shotguns, and submachine guns, but today it’s all about rifles. The defining feature of a bullpup rifle is the placement of the action behind the trigger.

This places the gun’s operating system behind the trigger in what is essentially the stock. This saves quite a bit of space and lowers the rifle’s overall length.

Bullpups look like Space Age blaster rifles and it’s not uncommon to assume they are a recently discovered concept. Most are surprised to discover that the bullpup concept dates as far as 1903.

The Army experimented with a Springfield 1903 bolt action rifle in a bullpup configuration. In 1918 the first semi auto bullpup was invented and was known as the Faucon-Meunier of France. The first bullpup adopted into military service was the EM-2 adopted in 1951 for a very short period.

Modern bullpups have been around since the 1970s. Rifles like the FAMAS and AUG have served extensively in Europe and are still serving today.

The biggest advantage to the bullpup platform comes in space saving design. A shorter rifle is typically a handier rifle. Shorter rifles are easier to use inside buildings, in and out of vehicles, and are masters of close quarter battle. With a standard rifle the only way to trim size is to shorten the barrel.

A short barrel will often negatively affect a rifle round’s performance. The shorter barrel results in a loss of velocity and effective range. On top of that you’ll be forced to deal with a louder rifle that packs a more extreme muzzle flash and potentially brutal concussion.

Short barreled rifles are designed to be used in close quarters, so imagine increased muzzle flash and concussion in a close quarters environment.

Without ear and eye protection, or a suppressor, you’ll be blind and deaf after the first few shots. A bullpup has a full-length rifle barrel in a platform just as compact and handy as a short-barreled rifle.

Let’s use the AUG as an example. The Steyr AUG with a 16-inch barrel is 8 inches shorter than an M4 carbine with the same length barrel. You can even equip the 20-inch barrel to the AUG and still have a rifle 4 inches short than the M4.

Bullpup rifles also tend to be faster to get to the shoulder. This reduces the time it takes to get on target. This reduced reaction time can potentially be lifesaving in a firefight, or competition winning in a multi gun shoot.

Lastly, bullpups tend to focus the weight to the center or rear of the weapon. This makes them easier to carry over long periods since the weight isn’t hanging off the gun. Trust me, as a former Marine carrying a rifle for 12 to 14 hours is tiresome.

You’ve gone through the appetizer, the bread, and soup, so let’s get to the main course. Here are our top 5 bullpup rifles. After dinner stick around for desert where we go over a few disadvantages of the bullpup platform.

Since bullpups are varied in design and purpose I’ve put together five bullpups that are designed for different uses and represent the best in their class. I firmly believe there is no perfect rifle for every task, but perfect tasks for certain rifles.

The Steyr Aug is one of the most widely adopted bullpups for military service and it’s one of the best bullpups period. The A3 M1 version is the modern variant of the AUG platform.

It’s a very easy shooting rifle that’s quite accurate. It weighs less than 9 pounds with its integrated optic. It’s only 28.15 inches long with a 16-inch barrel and is chambered in 223/5.56.

The AUG A3 M1 is the best bullpup choice for home defense, duty use, and multi gun competitions. It features very low recoil, an efficient flash hider, and is chambered in a capable and common self-defense round. It’s a thoroughly modern rifle that allows the end user to customize it to their needs. You can easily attach lights, swap optics, add slings, and more.

The AUG A3 M1 comes with a variety of options right out the gate and features a remarkable level of modularity. You can choose to add an integrated 1.5x or 3.0x optic, or an optic’s rail to add your own. If you choose the optic but later wish to swap it, you can purchase the scope railed base and add your own optic.

The AUG comes with a 16-inch barrel, but you can very easily switch the barrel to a 20, or even 24-inch barrel. It takes less than 1 minute to swap barrels. You can even swap the ejection port and charging handle to the left-hand side if you choose to do so. The Steyr AUG A3 M1 rifle is an outstanding gun, and easily one of the best bullpup rifles ever.

If you have a strange to desire to hit targets in excess of a mile away, with a very big bullet then I have the bullpup for you. The Barrett Model 95 is 50 caliber rifle that aimed to make the massive and tremendous 50 caliber platform a bit shorter and lighter. It’s a foot shorter than similar Barrett rifles, and almost 10 pounds lighter.

This bolt action 50 caliber rifle feeds from a 5-round magazine and features a 29-inch barrel. The rifle is designed to be simple, powerful and accurate. This is the best bullpup rifle for those looking for long range shooting power. While it’s built as a sniper rifle it’s well suited for competition shooting in Big Bore and 50 caliber competitions.

Speaking from experience this muzzle brake makes a world of difference. It also sends out such a mighty blast that dust and debris tend to fly outwards from the shooter.

This gun is so mighty even the ground is afraid of it. Barrett’s reputation as a firearm manufacturer can’t be ignored either. They produce rifles for the United States military and their use in combat has proven them reliable and capable. Barrett’s customer service is so good they once helped Marines in a firefight fix their rifle.

If you are looking to maximize control and minimize recoil the Jard J68 is for you. The Jard J68 is a pistol caliber bullpup rifle. It comes in 40 S&W, 9mm, or 45 ACP. These rifles feature a 17-inch barrel and an overall length of 26.25 inch.

Because they use a pistol round they are capable of being quite lightweight and weigh only 7.5 pounds. One of the primary benefits to using a pistol caliber carbine is that they can match the round you carry on duty or concealed.

The Jard J68 uses Glock magazines, which is another major advantage. Glock magazines are affordable, easy to find, and quite reliable. Glock is also one of the most common concealed carry, competition and service pistols in the world. This means it’s easy for a lot of shooters to mix and match mags for both their handgun and rifle.

A pistol caliber bullpup is the best bullpup rifle for someone sensitive to recoil, and possibly intimidated by rifle calibers. The Jard J68’s recoil is barely noticeable and quite pleasant. It handles brilliantly, and it’s relatively quiet compared to a rifle caliber bullpup.