Small But Deadly: These Are The Planet's Best 5 Bullpup Rifles 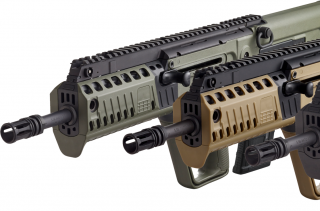 With a suppressor it’s insanely quiet. The Jard J68 features a modern M-Lok railsystem for attaching accessories of all kinds.

The gun is also friendly to both right and left-handed shooters since ejection is downwards instead of to the left or right. When it comes pistol, caliber rifles the Jard J68 is the best bullpup rifle option out there.

While the last few bullpups on our list have all been more tactical, competition, and self-defense oriented the Kel Tec RFB is the perfect hunting or survival bullpup. It’s a 308 caliber semi-automatic rifle with an 18 or 24-inch barrel and an overall length of 26 to 32 inches.

It’s excellent for hunting game as large as an elk and as small as a coyote. The Kel Tec RFB takes advantage of the more powerful 308 with the slightly above average length barrel options. The RFB utilizes FAL Metric magazines which are quite common and easy to find.

The RFB is completely ambidextrous and ejects towards the front of the weapon. The rifle is a little heavier than most, but for a 308 caliber rifle it’s rather light. It’s only a little over 8 pounds.

The RFB is even optics ready, making it even better as a hunting rifle. The full length picatinny rail is perfect for moderate to powerful scopes. The RFB is an interesting design that is perfect for long range hunting, brush hunting, and survival.

Finally, we end with the most affordable bullpup rifle. Maybe I’m cheating here, because this is a combination of a standard rifle and a bullpup stock. The famous Ruger 10/22 is well known for its reliability, simplicity, and massive amounts of customization options.

One such option is the Aklys Defense ZK-22 stock. The Ruger’s barrel and action easily fits into the kit and gives the rifle all the advantages of a bullpup rifle.

The ZK-22 and Ruger can be purchased separately so if you already own a Ruger 10/22 it’s only a minimal investment. If you don’t you can save a little money and purchase the Ruger 10/22 outfitted with the ZK 22 stock.

The stock system is ultra-modern and compatible with most Ruger 10/22 accessories, this includes the famed BX 25 magazines. The futuristic layout of the ZK-22 isn’t just for looks.

It improves the overall handling of the rifle and gives you the ability to mount optics and other accessories to the rifle. This is the cheapest option for you to get your bullpup fix. It’s affordable it’s reliable, and perfect for plinking or small game hunting.

DISADVANTAGES OF THE BULLPUP PLATFORM

There are a few disadvantages to the bullpup platform. While I know I promised desert, and desert is supposed to be sweet this one won’t be. I believe in being brutally honest and I want you to walk away with all the facts.

Bullpups are a fascinating rifle design and over the 30 or so years they’ve been in serious service we’ve seen drastic improvements. Bullpups are becoming ambidextrous, gaining better trigger options, and becoming easier to reload.

Are bullpups for you? Now that is question you’ll have to ask yourself. If you decide they are, then any of the five we’ve suggested would be a perfect fit.

This article by Will Ellis originally appeared at Gun News Daily in 2019 and is being republished due to reader's interest.