The Smith & Wesson Model 39: That Old 9mm Gun That Won't Just Go Away 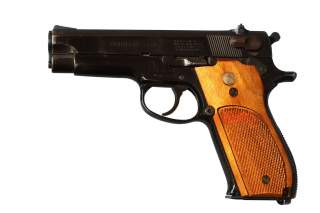 Key point: The Model 39 is a capable gun that earned its spot in American firearms history.

The Model 39 was a double-action pistol. It was 7.44 inches long and weighed just 26.5 ounces empty with a four-inch barrel. It was a recoil-operated handgun using a modified version of the Colt/Browning locking system used on handguns such as the 1911. Like the Walther P-38 the slim metal, single stack magazine held eight rounds of 9-millimeter Parabellum.

Kyle Mizokami is a writer based in San Francisco who has appeared in The Diplomat, Foreign Policy, War is Boring and The Daily Beast. In 2009 he co-founded the defense and security blog Japan Security Watch. You can follow him on Twitter: @KyleMizokami. This article was first featured earlier in 2019 and is being republished due to reader's interest.