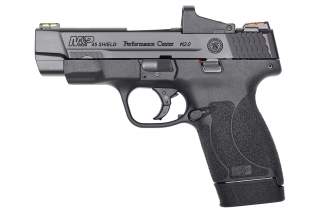 Smith & Wesson, one of the most well-known gun manufacturers in America, has introduced one of the most feature-filled semi-automatic pistols around. The M&P .45 Shield Model 2.0 subcompact handgun is a distillation of the company’s larger offerings, and the result is a pistol that is smaller yet leaves little on the table. Another benefit: unlike many subcompact pistols, the M&P .45 Shield 2.0 is available in the powerful .45 ACP caliber.

Smith & Wesson is one of the oldest gun manufacturers in North America. Smith & Wesson was founded in 1852 by Horace Smith and Daniel B. Wesson. The company did brisk business as a purveyor of quality revolvers, supplying them to the U.S. government in the Civil War, World War I, and World War II. During the Cold War, the company’s compact revolvers were issued to U.S. Air Force aircrews for self-defense in their aircraft crashed or was shot down.

In 1899, the company started up a “Military & Police” division, or known simply as “M&P”. The M&P line of handguns and long guns was and is designed to appeal to domestic and foreign military and law enforcement customers. Despite this, since the end of the Cold War few branches of the U.S. government use Smith & Wesson handguns. In the 2000s, the company rejuvenated its M&P line with pistols in the so-called “Wonder Nine” mold: semi-automatic, high capacity autoloading pistols made with a combination of polymer and steel.

The M&P Shield M2.0 is a subcompact handgun two steps smaller than a full-sized gun. This places it firmly in the police camp of the M&P line, both as a backup gun or undercover piece. The Shield is a small and stubby semiautomatic pistol but packs the firepower and ammunition count of a full-sized revolver.

The Shield M2.0 has an overall length of 6.5 inches, making it just as long as Glock’s subcompact Glock 26. The pistol includes a 3.3-inch stainless steel barrel inserted into a stainless steel slide. The slide, the largest part of the pistol that uses metal is treated with Armornite, Smith & Wesson’s new corrosion-resistant finish. The result gives the pistol a nice matte black finish that pairs nicely with the polymers used to construct the frame.

The pistol is chambered in .45 ACP. A single column magazine can carry up to six .45 rounds, and the company produces longer magazines that extend beyond the magazine well but can carry seven rounds. Like all pistols, the M&P Shield 2.0 can also carry an additional round in the chamber.

The subcompact pistol uses a striker-fired operating system, which eliminates the need for a hammer and uses a striker discharge the handgun. The striker-fired system allows the pistol to incorporate safety mechanisms designed to avoid accidental discharge when dropped or otherwise mishandled, short of actually pulling the trigger. A manual safety is available for some models, allowing experienced pistol carriers to skip a step in bringing their M&P Shield 2.0 into action. Less experienced shooters may want to invest in a pistol with a manual safety.

The .45 ACP round promises to deliver more energy against targets. Originally developed for U.S. troops during the Philippine Insurrection, .45 ACP typically delivers just over ten percent more energy than 9-millimeter Luger, or about 50 foot-pounds when comparing Federal full metal jacket ammunition. The large 230-grain slug is slow but full of kinetic energy, crashing into enemy targets at subsonic speeds with an average of 404 foot-pounds.

The pistol is made with ergonomics in mind. Controls are ambidextrous, and the pistol is sold with four different pawnswell backstraps of various sizes. This allows shooters with various hand sizes to achieve a custom fit. The serrations on the rear of the slide and fish-scaling on the front enable the user to get a good grip when racking the slide. The barrel has an eighteen-degree grip angle relative to the frame to help shooters find their natural point of aim.

The M&P Shield M2.0 is the second iteration of the M&P Shield and a mild revision to the product line. The 2.0 version of the pistol features a crisper trigger, bolder stippling on the grip for a better grip, and more aggressive machining on the slide to improve the shooter’s grip when chambering a round or press checking.

Although smaller than full and compact-sized versions of the M&P, the pistol doesn’t lack for features. The M&P Shield M2.0 is a pint-sized mixture of power and ergonomics that allow the subcompact to quickly be brought into action and get the user to safety.