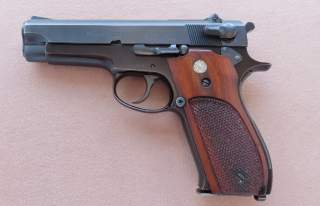 Key point: A double-action pistol that will carry the day.

The Model 39 was a double-action pistol. It was 7.44 inches long and weighed just 26.5 ounces empty with a four-inch barrel. It was a recoil-operated handgun using a modified version of the Colt/Browning locking system used on handguns such as the 1911. Like the Walther P-38 the slim metal, single stack magazine held eight rounds of 9-millimeter Parabellum.