So Wrong: High Taxes Didn't Make the U.S. Economy Boom in the 1950s 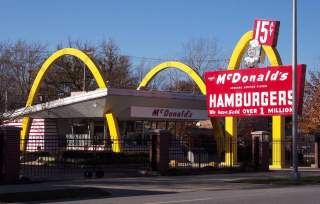 Some pretty successful companies were started during times of high US marginal tax rates, from the 1930s through the 1970s. Hewlett Packard, McDonald’s, Walmart, and Southwest Airlines. Or to pick more recent examples: Apple was started in 1976, Microsoft in 1975. Back then, the top personal rate was 70 percent, top corporate rates were in the mid-to-high 40s, and investment tax rates were in the mid-to-high 30s. So much higher than today.

And that bit of business history has led some to conclude that a return to those old tax rates would be no biggie. But I don’t think that’s correct. Tax rates matter. And while that may seem obvious, some of the extreme anti-tax cut rhetoric these days suggest too many don’t understand this point.

Taxes aren’t the only things that matter, of course. It matters, for instance, if a global war just ended and you are the dominant industrial producer in the world. It matters if you are experiencing a population boom, while also continuing to urbanize. And it matters if the economy has begun riding a digital technology wave thanks to one of the most important inventions since the wheel. All that — and a basic free enterprise system — offsets a lot of policy sins.

But how many more great companies would have been created, and how much faster economic growth might have been during those decades with better tax and regulatory policy? Think about how late 1970s deregulation (asset managers were allowed to allocate funds toward venture capital) and de–taxing (the capital gains tax rate was cut to 28 percent) boosted the venture capital industry and Silicon Valley. Historian Margaret O’Mara writes in The Code: Silicon Valley and the Remaking of America that the “biggest boon that the 1978 tax cut provided may have been a psychic one, giving both VCs and entrepreneurs more confidence to enter the start-up game once more.”

Confidence and optimism matter, especially when supported by better policy. As economist Michael Mandel has written:

Reagan’s first term saw the creation of such future giants as Sun Microsystems, Compaq Computer, Dell, and Cisco Systems (CSCO) — the greatest entrepreneurial burst of new companies since the early 20th century. … Taken together, the changes Reagan championed in the tax system fostered innovation and entrepreneurialism even as they encouraged the development of venture capital and investment in human capital. … As a result, the impact of the policies Reagan set out in the 1980s, which slowly worked their way through the economy, helped lay the groundwork for the Information Revolution of the 1990s.

Something to think about when you hear politicians propose massive new tax and regulatory schemes with little thought given to potential downsides.