Social Distancing on U.S. Destroyers and Submarines: How Is That Possible? 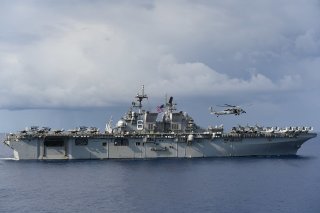 "Personal space" isn't something sailors serving onboard U.S. Navy submarines and destroyers probably ever think about. So far while the advice from medical professionals, as well as from President Donald Trump, has been to practice "social distancing" to avoid the spread of COVID-19 doing so in the confines of Navy vessels is even trickier than it sounds.

However, this week the Navy said that the disease isn't widely spreading amongst sailors.

"We've only had a very small handful of cases," Rear Adm. Bruce Gillingham, the service's surgeon general, told reporters last week via teleconference, as reported by DefenseOne. "The Navy is ensuring that sailors who display COVID-19 symptoms are tested, isolated and treated in accordance with Navy and Marine Corps Public Health Center and CDC guidelines."

On March 15, the Navy announced that a sailor aboard the USS Boxer – a Wasp-class amphibious assault ship – which had been docked in San Diego, had contracted COVID-19. Since that time there have been four cases of coronavirus; two on the Boxer, one on the destroyer USS Ralph Johnson and one on the littoral combat ship USS Coronado. In all four cases, the ships were in port, and the affected individuals were isolated

Gillingham said isolation and social distancing has been crucial in stopping the spread of COVID-19. "Because of those enhanced measures that were undertaken weeks ago, we have not seen active transmission," said Gillingham according to Business Insider. "So we believe they are essentially self-quarantined in place."

However, as with the general population, it is often difficult to know if someone who is showing only mild symptoms is carrying the virus. Currently, the Navy can take diagnostic samples from sailors who are suspected of having COVID-19, but the samples taken must then be sent to a DoD lab for processing while the sailors are put in separate quarters.

On smaller vessels that may not always be enough. One of the reasons is that it is possible to be a carrier long before showing symptoms.

"Many people who are infected with SARS-CoV-2 do not have severe symptoms and it can take some time after exposure before symptoms develop," said Thomas LaVeist, dean of the School of Public Health and Tropical Medicine at Tulane University.

"I recommend that everyone behave as if they are infected because you might be," LaVeist told The National Interest. "One of the most effective preventive behaviors is to stay at least six feet from others."

The less personal space one has the bigger the issue can be.

"Once an epidemic of coronavirus is underway inside a contained space, like jail, nursing home or a submarine it is extremely difficult to contain," LaVeist added. "I don't know how one could practice social distancing in an environment like that. So I recommend to our sailors serving ships or submarines that they be even more diligent than others about washing their hands and responding to even the slightest symptoms by wearing a mask and going into quarantine."

Unlike many civilians, those serving in the military are probably used to undergoing random screenings – something that could be crucial to ensure that there isn't an outbreak that can impact the readiness of a vessel.

"I would also recommend mandatory testing for all of our military personal and temperature checks before anyone is allowed to enter a ship or sub," said LaVeist. "That must also include the highest-ranking personal as well."