Socialism 101: All of the Things the Left Will Never Tell You 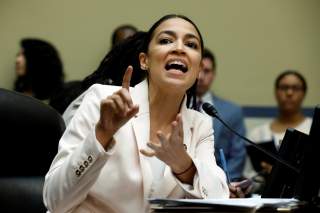 Young people across America are increasingly embracing socialism. A cloud of misinformation has led many Americans to think socialism is something it is not—a good system of government.

The Daily Signal recently interviewed Chris Wright, founder and president of the Anticommunism Action Team, to debunk the myths about socialism. A lightly edited transcript is below.

Young people across America are increasingly embracing socialism. A cloud of misinformation has led many Americans to think socialism is something it is not—a good system of government.

The Daily Signal recently interviewed Chris Wright, founder and president of the Anticommunism Action Team, to debunk the myths about socialism. The full audio is below along with a lightly edited transcript.

Rob Bluey: Chris, you joined us a few weeks ago, along with Jennifer Zeng and Darian Diachok, and we discussed their personal stories about growing up under communist and socialist regimes and their own experiences. It was truly captivating to hear their personal stories. But we wanted to have you back to talk more about the work that you’re doing, specifically the Anticommunism Action Team. Can you tell us about the organization, why you founded it and what it is you do?

Chris Wright: In 2013, my Alexandria Tea Party had a big program and we had survivors of communism from various countries, along with Dr. Lee Edwards from The Heritage Foundation. [We] had a couple hundred people in attendance and from there, I went on to found the Anticommunism Action Team in 2014 to formalize the activity.

In 2016, we added the speakers bureau, which Jennifer and Darian are part of. We have other speakers from Bulgaria, Czechoslovakia, other countries, Vietnam. And this year I’ve added a conference call.

I’ve gathered together the best fighters against socialism in the country I could find, so I now have subject matter experts who are joining me in some of our presentations.

Bluey: That’s wonderful to hear. So when you are doing this type of work, it must be truly transformational for not only the people who are hearing these stories but the individuals who have gone through these experiences. Can you share what that experience is like for you but also those who participate?

Wright: The speakers we have, I consider them the best weapon we have against socialism in this country and, as you mentioned, it’s their personal stories, it’s irrefutable, and they have a very powerful message.

Americans better wake up. We’ve been down the socialist road, we know what’s at the end of it. So, it’s been transformational for me in the sense that I know a whole lot more about this subject than I did five years ago. I’ve been privileged to work with these very special people for these five years and I’ve learned a tremendous amount.

In terms of, you talk about transformational experiences, I was invited to speak at a rally in Washington, D.C., last summer. It was … observing the nationwide protest in Vietnam against the internet regulation that was new at the time.

After I gave my little two-minute talk, a Vietnamese person comes up to me and he obviously didn’t speak English, but he just grabbed my hands and … what was in his eyes was such hope. …

That was just the most amazing, touching moment for me in my entire experience in the Anticommunism Action Team. That he had such hope that the activities I was undertaking would actually make a difference for him and his country.

Virginia Allen: That’s really encouraging to hear. Chris, what do you think has really changed in American that now socialism has become a coveted model of government by an increasing number of people, especially by young people?

Wright: When young people say they like socialism, and they obviously poll to this affect, but you also see polls that free market polls higher than socialism among young people and that just says to me … [that] there’s such confusion about this term that they just don’t know what they’re talking about.

So, socialism sounds great, they’ll sign up for it, but free market sounds great so they like that even better.

Bluey: Well, Chris, I have to thank you because I had the opportunity to sit through one of your Socialism 101 presentations and I learned a lot. I’m wondering if you can help walk us through what it is that you are communicating when you do these presentations and when you go about dispelling some of the myths about socialism?

Wright: I put together this module. It’s a 10-minute module and I do it in a presentation form and it gives the definitions of some terms—communism, Marxism, democratic socialism—and explains the confusion that has arisen around these terms.

The reason I did that is because I began to run into, in our presentations … I’ll never forget. We went to this senior center and there was a Republican group … and I had a couple of speakers there, and we did our thing, this man stands up, he’s a Republican, he’s all mad and he says, “I like socialism! I want my socialism! Don’t mess with my socialism!” And what he meant was his Social Security.

So, people throw these terms around in all sorts of ways and it’s just very confusing.

For example, when you had Jennifer and Darian, you did the podcast, I read through the first 98 comments that appeared within the first couple of days of that, and the confusion was evident all through the comments.

One person said fascism is the communism of the right. Well, that’s a new one on me. I’d never heard that one before.

Another person said there is no such thing as a capitalist country or a socialist country. Everybody has a mixed economy. Well, that’s true, but it’s useless.

That makes it sounds like there’s no difference between Venezuela and the United States. But I’ll tell you one very clear difference, when you go to Venezuela, the grocery stores, the shelves are empty. Here you go to the grocery store and there’s more items on the shelf then you can count.

So there’s clearly a difference between capitalism and socialism.

Bluey: Chris, let’s talk about some of those definitions. You talk about Marx’s theory and how he goes from feudalism to capitalism to socialism to communism. Can you walk us through that so we can understand how they are connected?

Wright: Sure. He laid out this theory that was based on iron laws, supposed iron laws, of history. Economic determinism and these phases, one would follow one to the other and it always involved the dominate class that was replaced by the next dominant class.

So, the aristocracy was replaced by the bourgeoisie of capitalism and then you get the socialism, which, the textbook definition is the common ownership of the means of production.

Well, what do I mean by that?

I mean farms and factories and land, it’s all held by the government or held in common, however you prefer to put it. And then the last phase is communism, where there’s no more dominant class.

He wrote, co-wrote, “The Communist Manifesto” in 1848 with Friedrich Engels advocating the abolition of private property and, thereby, ushering in a classless society.

OK, no more dominant class. So, the state is just a superstructure riding on top of economics. If you don’t have a dominant economic class anymore, then what you’ve got is a situation where you don’t need the state at all, and so the state withers away.

I first heard this when I as 16. I thought it was a bunch of malarkey then. I still [do]. Here it is almost 50 years later, it’s still malarkey. It’s never happened anywhere. It’s a fantasy. It’s a bedtime story. It’s not ever going to happen.

Allen: Chris, one of the most common arguments for socialism is that the Scandinavian countries are essentially socialist and things seem to be going pretty well for them. So, why wouldn’t it work for us? What’s your response to that argument?

Wright: The response is the Scandinavian countries are not democratic socialists countries. The proper term for what they’ve got is social democracy. It may sound like just word salad but there’s a very key difference.

In the Scandinavian countries, they have a society leveling, levels of taxation, high taxation, and then cradle to grave redistribution and the term for that is social democracy.

And if you don’t believe me, you might believe the Danish prime minister who in 2015 said something very close to—this is a very close paraphrase, I want to make thing absolutely clear—Denmark is not a socialist country. It’s not a socialist planned economy. It’s a market economy.

So there you have it, and that’s what they got in Scandinavia. They’ve got social democracies and they’re happy. …

This part’s interesting. … The University of Michigan professor who did the first survey, about the happiest countries on Earth, and ranked Denmark at the top, or near the top. I’m forgetting because it’s been some years now.