Socialists Are Destroying One Country in Europe 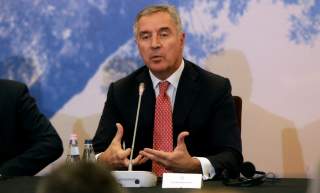 After thirty years of such corruption and deceit, Montenegrin public opinion surveys understandably reveal that dissatisfaction with the direction in which Djukanovic has led the country is increasing. Meanwhile, Djukanovic is facing other problems as well. Formerly-friendly Western diplomats are calling for him to go, one of his party’s key financiers has defected (and revealing the pervasive racketeering Djukanovic’s party engages in), and thanks to a dubious $1.5 billion Chinese infrastructure loan Montenegro’s debt-to-GDP ratio has now risen to 80 percent. If Djukanovic defaults on the loan, then the terms of the agreement allow China to claim Montenegrin territory as collateral.

If the recent assassination attempt against a Djukanovic opponent is any indication, the potential for events spinning out of control is increasing. One Montenegrin diplomat, for instance, recently called for a Serbian Orthodox Church to be burnt down—with its worshipers inside it.

Washington is now confronted with one of its perennial strategic and moral foreign policy dilemmas. With pressure mounting against him from all sides, Djukanovic will resort to increasingly desperate measures to stay in power. This will, in turn, provoke an ever-greater confrontation with the country’s political opposition and civil society.

Djukanovic, of course, is playing a game every two-bit authoritarian across the globe—from Latin American dictators to Middle Eastern despots—is familiar with. By simply presenting Washington with the false dichotomy that “it is me or the communists/Russians/Iranians/etc.” Such dictators know there are those in Washington who will give them carte blanche to jail their political opponents, persecute independent media, and otherwise attack any organization capable of threatening their rule.

Washington thus has two choices before it. One course of action would be to continue to prop up Djukanovic’s corrupt regime. Over the past decade, Washington has allowed Djukanovic to make NATO accession a substitute for democratization (to take but one example—soon after Montenegro formally joined NATO, Djukanovic marked the occasion by purging the country’s state-run broadcaster of its few remaining independent voices, with no complaint from Washington.) If Washington continues down this path, then it will assume strategic responsibility for the instability and depredations Djukanovic’s rule will continue to cause, and moral responsibility for betraying any hope for peaceful democratic reform in the country.

Alternatively, Washington can be true to its alleged moral principles and stop supporting Djukanovic’s thirty-year-old authoritarian kleptocracy. If Washington is serious about promoting democracy in the Balkans, then it will demand an end to the political repression and criminal behavior, which is part and parcel of Djukanovic’s regime, and clear the way for the first democratic transition in Montenegro’s history. Apart from striking a serious blow against organized crime and corruption in southeastern Europe, moving against Djukanovic would also send a strong message to the Balkans’ other would-be petty authoritarians that their predations will no longer be tolerated.