Solving the Mystery: Where Did North Korea Get Its Missiles? 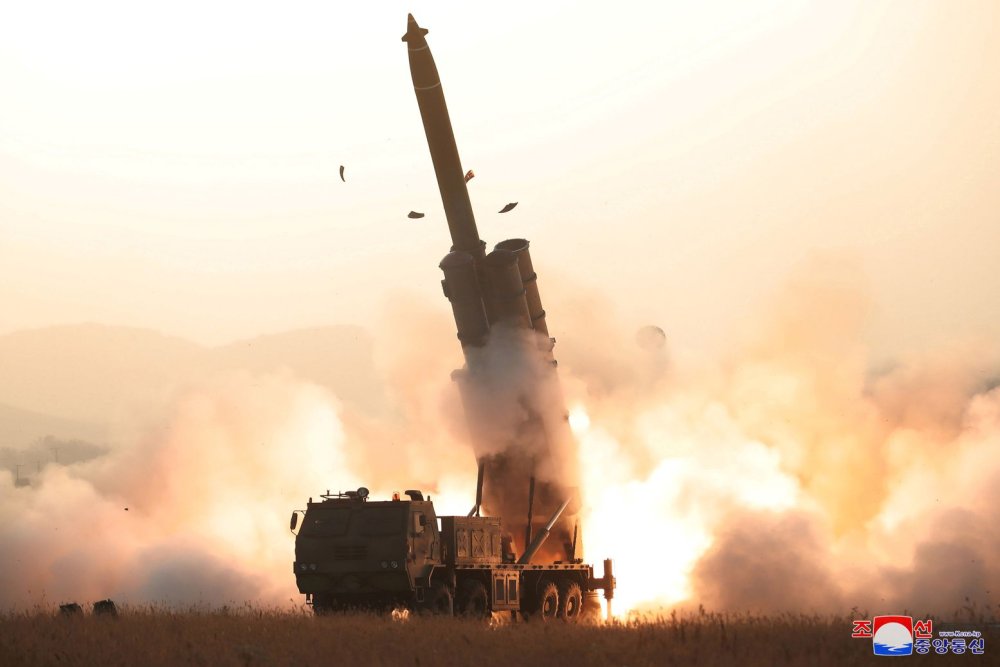 Key Point: There are multiple possabilities, some more likely than others.

In the quarter century since the end of the Cold War, much of North Korea’s conventional-weapons capability has quietly aged into obsolescence. Abandoned by the now-defunct Soviet Union and China, Pyongyang’s arsenal of tanks, ships, planes and artillery appears trapped in the 1980s—or earlier. A few weapons, however, including a new antiship missile fired just last week, are fairly new, prompting questions as to exactly where they came from.

After the Korean War, the Korean People’s Army was rebuilt with Soviet and Chinese weapons. Wartime T-34 tanks were replaced with Soviet-built T-62 and T-55 tanks in the late 1960s and early 1970s, and a large fleet of seventy-seven Romeo-class submarines was purchased from China. Pyongyang bought from both countries, favoring one over the other as the political winds blew. One of the country’s last major purchases was a fleet of seventeen MiG-29 “Fulcrum” multirole fighters and thirty-six Su-25 Frogfoot attack jets.

The breakup of the Soviet Union in 1991 left the East Asian dictatorship without a patron that dispensed weapons on easy credit terms, and the lack of modern gear is telling. North Korea’s latest tanks are still based on the T-62, and Romeo-class submarines, one of which Kim Jong-un famously took for a ride in 2014, are still in active service. Occasional upgrades, such as the addition of Bulsae (“Firebird”) antitank missiles to the Chonma-ho main battle tank, do little to upgrade the combat effectiveness of what is in reality an obsolete tank.

Certain weapons, however, stand in stark contrast to the rest of North Korea’s aging weapons collection. One is what appears to be a copy of the Russian Kh-35 antiship cruise missile. Known in Russia as the Kh-35 Uran and to NATO as the SS-N-25 “Switchblade,” the Kh-35 has a range of seventy nautical miles and a 320-pound high-explosive warhead, flying above the wavetops to stay undetected as long as possible. Guided by active radar, the subsonic missile is roughly comparable to the American Harpoon antiship missile, earning it the nickname “Harpoonski.”

Although the Uran’s development predated the end of the Cold War, the missile never entered Soviet service, joining the Russian Navy only in 2003. The missile first surfaced in North Korea in June 2014, when it briefly appeared in a North Korean propaganda video. The missile, which appeared to be launched from a ship, was identical to the Uran, although the shipboard mounting hardware appeared different from Russian hardware. North Korea launched a volley of four Kh-35s on June 7 from the vicinity of Wonsan into the Sea of Japan.

The Pon’gae-5’s uncertain provenance makes determining its capabilities tricky. The S-300 is a long-range missile system capable of intercepting targets at all altitudes and is roughly similar to earlier models of the American Patriot missile. It also appears to have a phased-array radar similar to the FLAP LID radar used by the S-300. A test launch was conducted the weekend of May 24, during which North Korea’s KCNA state news agency reported “defects” uncovered in previous testing were “perfectly overcome.” According to the news agency, the Pon’gae-5 is now considered operational.

Where did these mystery weapons come from? There are several theories, and there are almost certainly different origins for different weapons.

In the case of Uran and the Pon’gae-5, one theory is espionage. North Korean agents were known to have contacted ex-Soviet military scientists and engineers after the breakup of the USSR, and may have traded cash for expertise. North Korea may have been unable to act on this information in the 1990s, when the economy crashed, but the country’s slow rebound may have freed up the resources to pursue a precision-guided tactical-rocket program.

Another possibility is that these weapons are the result of indirect technology transfers from third parties. Uran missiles could have come from Myanmar’s former military government, which had strong ties to North Korea. Myanmar was known to have purchased Uran missiles from Russia, and could have transferred them to North Korea. Another possibility is Iran. Pon’gae-5 could have come from Syria, a S-300 missile operator, and KN-09 multiple rocket launchers could be based on Chinese A-100 systems provided to Pakistan.

In each case, the North Korean version of the weapon is likely a homebrewed version. North Korea has an unknown number of Uran knockoffs, but it does apparently have enough to place on surface ships and shore batteries—including the four launched last week. This lack of concern about running out of Urans suggests the missiles are domestically manufactured. Another curious detail: South Korea’s Joint Chiefs of Staff reported the missiles flew for 124 miles, which is forty-four miles longer than the reported range of the Kh-35. This suggests the North Koreans increased the missile’s liquid fuel supply, something they have experience in with the much larger Scud platform.

A third and final theory is that the weapons indeed came from China or Russia, with a blind eye turned to their export. Like all conspiracy theories, it’s impossible to prove or disprove. Both countries ceased selling arms to North Korea a long time ago, and the political dangers of selling arms to a country that will promptly point them at the United States outweighs the risks. While the reclusive state is a useful diversion for both, Pyongyang already has nuclear weapons to attract Washington’s attention.

North Korea has shown itself to be a canny state that can get what it wants, whether by pressing its citizens to the maximum or by utilizing a carefully cultivated network of overseas contacts to surreptitiously import banned weapons—all with the goal, of course, of ensuring the regime’s survival. The presence of advanced weapons in the Korean People’s Army’s arsenal is proof the country is not without resources of its own, and will do what it can to survive.

Kyle Mizokami is a defense and national-security writer based in San Francisco who has appeared in the Diplomat, Foreign Policy, War is Boring and the Daily Beast. In 2009 he cofounded the defense and security blog Japan Security Watch. You can follow him on Twitter: @KyleMizokami. This piece was originally featured in June 2017 and is being republished due to reader's interest.