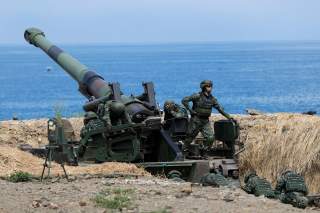 Key Point: The key is massive American arm sales to the island nation.

Various sources from within the People's Republic of China have allegedly suggested that time is running out for Taiwan's democracy. In their narrative, China's iron-fisted leader, Xi Jinping, is "losing patience" and could order the invasion of Taiwan in the early 2020s. The world's most dangerous flashpoint might witness an overwhelming amphibious blitz, perhaps before July 2021 to mark the 100th anniversary of the founding of the Chinese Communist Party (CCP).

That's the narrative. The reality is that China will probably not attack Taiwan in such a radical and high-risk fashion. Xi and his top lieutenants are far more likely to draw-out and escalate the war of nerves across the Taiwan Strait. They will continue using disinformation and other techniques to drain Washington's confidence that Taiwan can be defended, while ramping up subversive activities to undermine the island nation's confidence and willpower.

Xi will bide his time and hope the Taiwanese government cracks under mounting pressure, allowing him to conquer his target cheaply. At the same time, his military generals will continue planning and preparing to deliver on their "sacred" mission. Coercion could easily fail, making invasion a tempting option―especially in a future scenario where the balance of power looks more favorable to Beijing than it does today.

The PLA's strengths are more apparent than its weaknesses. China's military muscle is frequently highlighted and hyped up by the media, both in Beijing and abroad. Undoubtedly, China's ballistic missiles, cyber warfare capabilities, and counter-space weapons make it a force to be reckoned with. Perhaps even more dangerous are its espionage and covert actions abroad to shape foreign policymaking.

But there is always more to the story. Renowned Naval War College professor, Andrew Erickson, makes it clear in his recently published book, Chinese Naval Shipbuilding that while Beijing's fleets are growing at a remarkable clip, the PLA Navy is not ready to support the invasion of Taiwan. The Chinese navy still lacks the lift capacity and the air defense capability it needs. Nonetheless, the situation will almost certainly look very different tomorrow than it does today.

Dennis Blasko, author of The Chinese Army Today, observes that the CCP's ground forces, like the navy, are not yet ready for the ultimate fight. For invasion to be a realistic option, China would have to have far more helicopters, paratroopers, special operators, amphibious mechanized divisions, and marines. Moreover, the PLA would need to build a solid non-commissioned officer corps and provide better training to unit leaders up and down the entire chain of command. Much of this work has already begun and will start to bear fruit over the next decade.

So how do Taiwanese military experts plan to defend their country against attack, and how can the United States help?

Taiwan is at the tail end of a transit from a conscription force to an all-volunteer military. Building an elite force of professional warriors is a good thing. It gives Taiwan a comparative advantage. China has no national army and relies mostly on short-term draftees.

According to a recent RAND Corporation report, Taiwan could augment its all-volunteer military with elite reserve force units, further enhancing its ability to counter Chinese threats in the electromagnetic, air, and sea domains. Taiwan's armed forces could also benefit from new training opportunities. Bilateral training exercises and joint humanitarian missions with the U.S. military would give Taiwan a much-needed shot in the arm.

Modern wars are increasingly decided not by brute force, but by brainpower. This can only be harnessed with advanced training. One of Taiwan's primary defense goals is to prepare the island for the shock of a lightning war waged by the Peoples Liberation Army (PLA). Doing so requires highly-motivated personnel who are organized, trained, and equipped to meet an enemy invasion campaign with overwhelming resistance.

The asymmetry of size and economy across the Taiwan Strait requires defense planners on the island to harness every aspect of power, bringing a wide range of latent capabilities to bear when needed. Taiwan's all-out defense strategy calls for mobilizing the entire country, gearing-up every able-bodied man and woman in support of anti-invasion operations.

As Lauren Dickey of Kings College London points out, Taiwan's Ministry of National Defense (MND) is constantly honing its ability to repulse Chinese invasion. Every year, MND conducts intensive national and local-level military exercises, testing and sharpening plans to defend the island in the event of enemy landings.

It is estimated that Taiwan will have approximately four weeks advanced warning of a Chinese invasion. Given China's skill in the dark arts of strategic deception, this cannot be taken for granted. Yet the vast scale of the PLA's envisioned amphibious operations necessarily means its offensive intentions would be foreshadowed.

Warning signs would include troop movements, reserve mobilization, industrial stockpiling, military drills, media signaling, diplomatic messaging, and sabotage against Taiwan. The most obvious and worrisome sign would be the gathering of massive fleets of civilian and naval vessels at known amphibious staging areas in southeast China.

As all this was playing out, Taiwan's president, her cabinet advisors, and parliamentary leaders would debate their response options. They would weigh intelligence pouring in from radars, satellites, listening posts, and agents in China. Their most obvious option would be to increase readiness levels and mobilize the island to gun-down an enemy attack.

It would not take long to mine the maritime lines of approach across the Taiwan Strait, nor to fortify invasion beaches, ports, and airstrips. It would take only slightly longer to man all inland key points like bridges and power stations, and to evacuate non-essential personnel from potential battle zones. But accomplishing this would require a colossal workforce in the form of mobilized army reservists and contractors. For this reason, Taiwan maintains the ability to mobilize up to two and a half million men and nearly one million civil defense workers in just a few days time.

Tests of the emergency mobilization system are carried out on a yearly basis at sites across Taiwan, Penghu, and the outer islands (Kimen and Matsu). Their results are impressive. They indicate that citizen-soldiers will muster at marshalling posts in extraordinary numbers and at rapid speeds.

Taiwan’s all-out defense mobilization plan entails more than just bringing latent military capabilities into action. The Cabinet Office (Executive Yuan) and its subordinate ministries such as the Ministry of Transportation, Ministry of the Interior, and Ministry of Economic Affairs (among others) all play a role in the integration of civil defense units for homeland defense.

Taiwan's government and military (like the rest of Taiwanese society) are far tougher than they get credit for. But they can only do so much by themselves. The Pentagon has a critical role to play in assisting Taiwan maximize its war fighting capabilities. With America's help, Taiwan can make sure its defense investments factor into Beijing's calculations and, hopefully, prevent a future invasion from occurring in the first place.

The RAND report suggests the establishment of a joint working group, led on the U.S. side by an assistant secretary of defense. Indeed, Taiwanese forces would benefit from new types of professional military education and technical training in the United States. American mentors could support Taiwan’s continued transit to a potent all-volunteer force and help create a more strategically focused reserve force.

Taiwanese troops also need regular and dependable arms sales, something that unfortunately was denied them by the Bush and Obama administrations. For Taiwan, the positive operational and tactical effects of American weapons systems are indisputable. The Trump administration should offer Taiwan the same capabilities it is offering Japan and South Korea, including new stealth fighter jets, missile defense batteries, and destroyers.

In addition, American companies should be unchained by Washington, allowing them to compete for access to Taiwan's Indigenous Defense Submarine program. Even more important than firepower would be the huge morale boosting effects such material support would have on recruitment and retention on the island―and the powerful signal of purpose and resolve it would send to China.

Taiwan's military has developed a solid defense plan and is cultivating a force of professional warriors. But the grave invasion threat facing the island is growing over time. Keeping pace with China's offensive power will be extremely difficult unless big changes are made to the way America does business in Asia.

Going forward, the Trump White House would do well to develop a new strategy for advancing U.S.-Taiwan relations. Making sure Taiwan has the strong self-defense capabilities it needs will help keep the globe's greatest powder keg from ever igniting. Ignoring the China problem would only make it worse.

Ian Easton is a research fellow at the Project 2049 (where this first appeared) Institute and author of the forthcoming book, The Chinese Invasion Threat: Taiwan's Defense and American Strategy in Asia. This piece was first featured in 2017 and is being republished due to reader's interest.