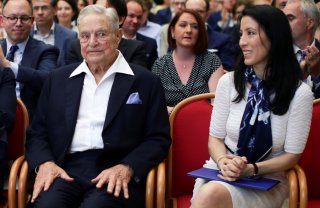 Billionaire financier George Soros believes President Donald Trump will use Chinese tech company Huawei as a bargaining chip to make a deal with China before the 2020 presidential election.

Trump might use the ban preventing U.S. companies from doing business with telecommunications company as a conduit for a possible deal with China, Soros wrote in a Wall Street Journal editorial Tuesday. The liberal scion, a frequent conservative antagonist, is an unlikely Trump ally on China.

“He wants to arrange a meeting with President Xi Jinping as the 2020 election approaches and make a trade deal with him, and he wants Huawei’s status on the table as one of his bargaining chips,” Soros wrote, referring to what he believes is Trump’s long play.

The octogenarian pointed to the president’s past actions toward other Chinese telecommunications companies to illustrate his point.

Trump announced in May 2018 that he would revoke similar bans on China’s ZTE, a Huawei competitor, even after the company violated economic sanctions by selling valuable U.S. technology to Iran. Soros surprised many in January when he publicly expressed support for Trump’s Chinese policy.

He offered a robust criticism of China in January, telling an audience in Switzerland that Chinese President Xi Jinping is a “dangerous” opponent to an open society. Chinese spokeswoman Hua Chunying pushed back, telling reporters  at the time that Soros’ remarks were “meaningless.”

Soros is now worried the president is getting weak-kneed as critics argue his policies are causing the economy to sink.

“It’s hard to know exactly what’s motivating Mr. Trump, but he appears desperate for a deal with President Xi to bolster the U.S. stock market and economy to improve his chances at re-election—putting his electoral interests ahead of America’s interests,” he wrote.

Soros is also calling on Republican lawmakers to craft legislation preventing the president from using Huawei a ploy. The liberal donor believes China’s technology represents a deadly weapon to Soros’s desire to see an open society, free from what he believes are the failures of China’s social credit system.