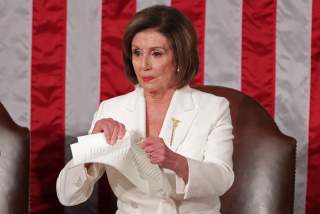 When House Speaker Nancy Pelosi tore up the text of President Donald Trump’s State of the Union speech in full public view, her supporters saw defiance of both his policies and his earlier refusal to shake her hand. But her political opponents cried foul, calling it “unbecoming” and “nasty.” This is yet another example of why U.S. citizens of all political stripes agree that politics has become unacceptably uncivil.

People say they want everyone to have cool heads and polite exchanges of views, even during important political debates. Some may even want a return to a kinder, gentler time when Democrats and Republicans ate breakfast together at the same table in the Senate cafeteria.

That’s not realistic, in my view. It is a good idea to stay calm when dealing with other people. But it may be that civility is too demanding, asking too much of passionate human nature. As I argue in my new book, “Overdoing Democracy,” a better idea of civility involves not the total absence of hostility or escalation, but avoiding those extremes unless truly necessary.

The problem Pelosi encountered lies in differing views of when an impassioned act is considered appropriate and when it is an example of incivility. People are prone to see, and complain about, incivility in their political opponents, while being blind to, and silent about, the same flaws in themselves and those like them. And once they spot an opponent being uncivil, they free themselves to retaliate in kind.

Political debates invoke differing ideas of justice and fair play, opportunity and oppression. When disagreeing about these things, people tend to see one another as not merely mistaken but actually in the wrong. Heat and fervor are to be expected when important matters are in dispute.

Indeed, a louder voice or sharper tone are sometimes necessary in order to communicate the urgency of the issue under discussion, and to grab the attention of those who might be inclined to overlook it.

It can even be appropriate to antagonize a person, especially if they are powerful and locked into their prejudice. For this reason, political satire and mockery are within civility’s bounds. But it’s always better to be restrained, since civil antagonism can quickly shift into, or at least be seen as, intimidation and harangue.

Properly understood, civility is more a matter of a person’s internal mood than of their directly observable behavior. When judging someone to be uncivil, it’s not necessarily the person’s aggravated tone or excessive volume, but how appropriate it is for them to speak that way in the given moment.

So determining civility means judging a person’s character and motives. But when it comes to people who disagree with us, humans are remarkably poor judges.

A recent study shows that people generally regard those with opposing political views to be untrustworthy, close-minded, dishonest and unpatriotic. Unsurprisingly, people tend to blame their opponents – not themselves or their allies – for the incivility that has spread throughout politics.

Similarly, people’s assessment of political behavior sticks closely to partisan allegiances. People tend to approve of what their side does, and disapprove of the actions of the other side. This is true even when both sides do the same thing. So if a political ally engages in potentially objectionable political behavior, like stealing the opposition’s campaign signs, people tend to be more forgiving than when an opponent does the same thing.

Civility is a two-way street, an obligation between two people. It’s like the playground rule of keeping your hands to yourself, which still lets you defend yourself against an attack. Kids have to keep their hands to themselves, so long as others do the same.

So people tend to be overly sensitive to apparent incivility from opponents, and often feel free to respond with incivility themselves.

The result is tragic. People across the political spectrum agree that incivility is poisonous. However, rebuilding civility requires people to trust their political opponents and believe they are well-intentioned and willing to reciprocate.

Partisan divides have rendered many Americans nearly incapable of regarding their rivals in so positive a light. Civility might be practically impossible today. At the very least, it is more difficult than many people suppose, because of the human tendency to feel contempt, not compassion, for opponents.