Sorry, Mike: Why Americans Are Not Putting up With the New Elite 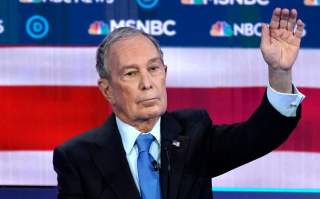 Key point: America is still dominated by super-rich and powerful elites. They got their wealth through the technology revolution and average voters aren't happy with them.

The following is the latest in a series of blog posts accompanying newly-released Bradley Lectures Podcast episodes. The subject of this post is “The evolution of the Bobo,” an episode examining David Brooks’s 2000 Bradley Lecture, “How the New Elite is Changing American Culture.”

One of the prominent features of our populist moment is the demonization of a class of people called “the elite.” Who precisely that class includes is often unclear: It might be the wealthy, individuals influencing politics and media, or those with cultural sway and influence. One might even assume that these groups are more or less interchangeable, connected in ways not immediately apparent.

What is common about the elite, at least in the story told by populist figures, is that they are the bad guys — the enemy of the common man or “real American.” On the populist left, “elite” refers to bankers, CEOs, and others who make gobs of money while employing lots of workers who make far less. On the right, the elite are cultural tastemakers in Hollywood and New York, as well as crony capitalists who use political connections to gain subsidies and other favors from the bloated apparatus of the state.

But as populism ascends, the line between left and right increasingly blurs. Take Tucker Carlson’s recent contention that “Big business hates your family.” Carlson denounced the political and cultural influence of wealthy entrepreneur-activists, including the Koch brothers and Mark Zuckerberg, and distanced himself from a more traditionally conservative brand of populism. He points his finger in a new direction, to a different kind of elite: “The main threat” to Americans’ general welfare, he argued, “does not come from the government anymore, but comes from the private sector.” Conservative observers, still wary of state power, might wonder: What changed?

Perhaps one factor is the composition and characteristics of the elite themselves. As David Brooks (then of the Weekly Standard) observed in his May 2000 Bradley Lecture, “How the new elite is changing American culture,” the elite class that emerged in the late 20th century was culturally unlike its predecessors.

These nouveau riche were neither stodgy adherents of the Protestant ethic nor free-spirited artists who made their fortunes off music protesting the Vietnam War. They were “Bobos,” synthesizing the ethos of two traditionally-warring cultural factions — the bourgeoisie and the bohemians — into a new breed of high-earning yet culturally-nonconformist professionals.

What distinguished the new elite was their peculiar combination of bourgeoisie behaviors and bohemian tastes. This blending yielded a stark discrepancy between what the elite would practice — traditional families receiving traditional education and emphasizing traditional values, realms that Brooks points out were important enough to rise to the level of “needs” — and what it preached. The Bobos helped foster a mass culture deploring judgment and celebrating the bohemian mantra of choice as the highest good, indvidualism uber alles.

On the latest episode of the Bradley Lectures Podcast, Christina Hoff Sommers clarifies how these cultural trends transmogrified into two deeply interconnected political trends. “[Brooks] didn’t think there was going to be an uprising. People didn’t resent the new elite. In fact … they wanted to emulate them,” Sommers notes. This changed when people realized that “the new class was antagonistic towards the so-called ‘underclass,’ in the sense that it ignored [or] denigrated a lot of the institutions that were critical to the well-being of those less privileged.” Social classes without the luxuries of bourgeois income and infrastructure received the cultural message that they were both benighted and privileged.

The elite, now at the helm of bourgeois institutions, would look upon mass culture and markers of traditionalism with scorn. At the same time, though, as the new elite “flaunted its privilege by deploring it,” in Sommers’ phrase, they deplored privilege along other lines, namely race, gender, and sexuality. So the ‘underclass’ – largely white, straight, and proportionally male — was left feeling victimized by the elite, not well-served by concessions to the bohemian ethic yet derided for other sources of unearned privilege.

With this context in mind, the new populist revolt — and the unusual choice of target for Carlson and his ilk — makes a great deal more sense. Big business, not big government, is seen as the manifestation of the performatively “woke” yet still-traditional elite, who work bourgeois jobs but continue to talk like bearers of the counterculture. It once seemed as though class warfare was a relic of the past, and the synthetic breed of Bobos would provoke only admiration from the masses. But class consciousness has evolved — and class warfare rages once again.