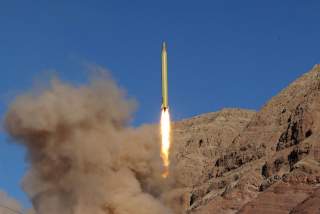 Greater attention will be given to Iran's missile and unmanned aerial vehicle (UAV) programs from now on. The September drone attacks on the Abqaiq and Khurais oil facilities in Saudi Arabia and the January missile attack on two military bases in Iraq that left 109 U.S. military members diagnosed with traumatic brain injuries highlighted Iran's increased willingness to use its missile and UAV arsenal for tactical and strategic objectives.

Iran's missile program is an integral component, if not the crown jewel, of its armed forces, and Tehran considers the program essential to national security. The United States, however, wants to significantly constrain Iranian missile development in future negotiations that would also cover Iran's nuclear program and its support for regional militias. But to reach a deal, the United States will have to narrow its conditions. This will limit the prospects of an agreement under U.S. President Donald Trump's maximalist demands.

The Legacy of the War of the Cities

Almost from the time the Iranian missile program was created in 1979, its importance was embedded into the Islamic republic's psyche. Before he was deposed in the Iranian Revolution, Shah Mohammad Reza Pahlavi pursued his ambition to build the Middle East's most advanced and powerful military force. But it withered after the United States cut off military support in the revolution's wake. The outbreak of the Iran-Iraq war in 1980 demonstrated just how few military options Iran had left. Under the shah, it boasted the region's most capable air force. But without U.S. support, the country was unable to maintain the aircraft it had acquired, leaving it unable to answer the Iraqi missile and airstrikes that pummeled key urban centers like Tehran.

In response, Iran sped development of its missile and rocket capabilities in a bid to counter Iraq. Iran acquired a number of Soviet-designed Scud-B short-range ballistic missiles from Libya, Syria and North Korea. In 1985, the Islamic Revolutionary Guard Corps (IRGC) created its own military units, including its own missile force, in hopes of reverse-engineering the Scud-B missiles with the help of North Korea, which had itself used the Scud-B to create the Hwasong-5 missile. By the end of its war with Iraq in 1988, Iran was able to open a manufacturing plant to produce its own Scud-B variant, the Shahab-1 ballistic missile. But before that, Iran and Iraq both targeted one another's urban areas in exchanges of fire that became known as the War of the Cities. Hundreds of thousands of Iranians evacuated Tehran as the combat raged.

The experience of the war taught Iran the strategic value of using missiles to break the morale of opponents' populations and raising the economic cost of attacking Iran. Since then, Iran continued to pursue an advanced and diverse ballistic missile arsenal, often with North Korean guidance. In the 1990s, Iran developed the Shahab-2, its own variant of the Scud-C missile (equivalent to North Korea's Hwasong-6). While the Shahab-2's range of 500 kilometers (310 miles) improved slightly on its predecessor's, it still fell within the category of a short-range ballistic missile. At the same time, Iran also developed a medium-range ballistic missile based on North Korea's Hwasong-7 (another reverse-engineered Scud). The Shahab-3, with a range of 2,000 kilometers, could reach most of the Middle East.

As it worked to develop its missile program with North Korea's help in the 1980s, 1990s and early 2000s, Iran focused on acquiring ballistic missiles with a strategic aim of deterring its adversaries from pursuing to war with it, an objective it learned from its Iran-Iraq war experience. From a tactical perspective, however, those missiles gave Iran few battlefield advantages; the rudimentary navigational systems on early Shahab variants would often miss their designated targets by as much as a kilometer, on average. While this left them ineffective in hitting specific battlefield targets, they retained strategic value in targeting urban areas, where precision was not as important. 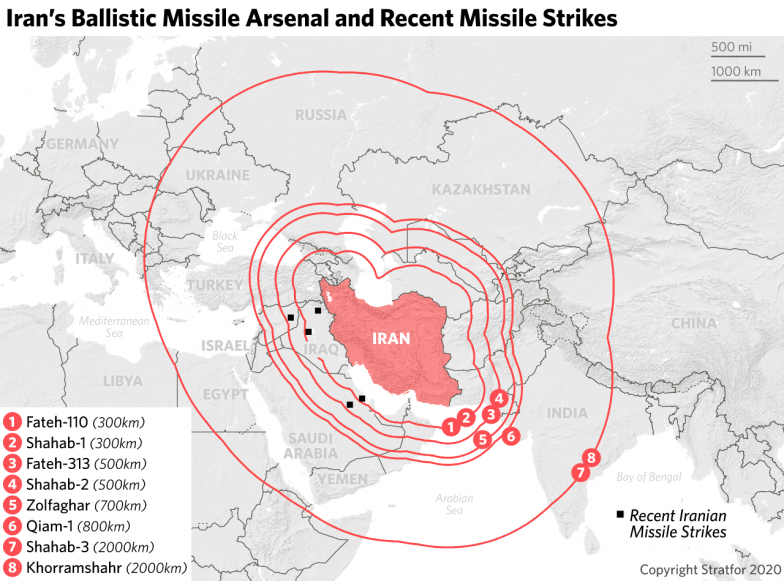 The uptick in Iran's own use of its ballistic and cruise missiles and its increased proliferation of missiles to its allies, particularly in Yemen and Iraq, suggests that Iran is becoming more willing to deploy its more advanced missile systems as their accuracy and capabilities improve. Granted, with most of the operations, the decision to use them tactically has often come in response to the actions of others.

Since 2017, Iran has launched missiles five times from inside its own borders — the first such strikes since 2011. In 2017 and 2018, Iran launched attacks against Islamic State targets in Deir el-Zour, Syria, using the Zolfaghar and Qiam-1 short-range ballistic missiles to retaliate for Islamic State-claimed attacks in Tehran and Ahvaz. Several of those missiles failed, proving to be largely inaccurate. In 2018, Iran launched seven Fateh-110 missiles against the Iraqi headquarters of the Kurdistan Democratic Party of Iran; several party leaders were killed when one missile hit the room where they were meeting. In 2019, several Iranian cruise missiles, thought to be Soumars, landed short of Saudi Arabia's Abqaiq oil processing facility. Finally, in January's attack on an Iraqi military base housing U.S. troops, Iran used 11 Fateh-313 and two Qiam-1 missiles to hit two sites, with several other missiles failing in flight. The accuracy of the attack remains a subject of study, but initial satellite evidence suggests a greater degree of accuracy than the 2017 and 2018 attacks in Syria. Nevertheless, operationally most of Iran's ballistic and cruise missiles appear to remain relatively inaccurate in a tactical sense, albeit with continued improvements. Iran found greater success with the UAVs it used against Abqaiq and Khurais.

Iran's ballistic and cruise missile programs are of increasing concern for the United States and other Western countries for several reasons. First, Iran has shown for decades that it is willing to transfer missile and rocket systems to its regional allies who have shown a willingness to use them. Second, the United States and Western countries fear that Iran may eventually develop an ICBM that could reach destinations far beyond the Middle East. This is precisely why they oppose Iran's space program, considering its dual-use capabilities. In addition, Iran's strategic missile program and any future ICBMs will be used to establish a nuclear deterrence if Iran can develop a nuclear warhead capable of being delivered by missile. Third, Iran has shown it is willing to use its missiles and drones against civilian targets, as evidenced by September's attacks on Saudi Arabia. And finally, the programs improve Iran's ability to inflict casualties and damage on U.S. and allied forces in the region.

Iran is not likely to easily agree to negotiations with the West that significantly cover its missile program. Indeed, Tehran fought hard to ensure that negotiations with the administration of former U.S. President Barack Obama focused solely on Iran's nuclear program. The 2015 Joint Comprehensive Plan of Action (JCPOA) nuclear deal and U.N. Security Council Resolution 2231 that implemented it contain ambiguous wording that gave Iran wiggle room to continue testing missiles without directly breaking either agreement. Resolution 2231 says that "Iran is called upon not to undertake any activity related to ballistic missiles designed to be capable of delivering nuclear weapons, including launches using such ballistic missile technology, until the date eight years after the JCPOA Adoption Day [October 2023]." Iran has argued that none of its ballistic missiles have been "designed" with the intent to deliver nuclear weapons and that it being "called upon" is not the same as stronger language like "shall not" that is often found in similar resolutions — giving it the room to continue its activity.

The European signatories to the JCPOA have typically agreed with Iran's interpretation and say that Iran's missile tests and space launches go against the spirit of the agreement, but they typically do not go as far as calling them an outright violations. But as Iran becomes more willing to use its missiles in an operational setting and continues to ramp up its nuclear program, Europe's tone has slowly shifted closer to the White House's position. Continued operations by Iran will only make it more difficult for the United States and increasingly Europe to accept compartmentalizing talks on a successor agreement to the JCPOA. At this point, from the perspective of the United States and Europe, the two issues are becoming increasingly intertwined as a result, which does not bode well for future talks if the West demands significant constraints on Iran's missile program.

That said, Iran has signaled in recent years that it may be willing to reach an understanding with the West about its missile program. In 2017, Supreme Leader Ayatollah Ali Khamenei said Iran would not develop missiles with a range beyond 2,000 kilometers, near the upper end of its Soumar and Khorramshahr missiles, and Iranian military leaders, including those in the IRGC, have reiterated that range limit. Nevertheless, the West still would likely demand that range restraints be written into an agreement, making it more difficult to achieve a future deal.

Iran's perception of threat in the Middle East has not changed. The Trump administration's decision to withdraw from the JCPOA has led Iran to realize that even if it signs another deal with the United States, there's nothing to prevent a future administration from negating it. So Iran would still feel compelled to continue to develop new missiles. In addition, Syria, Iraq and Afghanistan all remain violent theaters, and a resurgence of the Islamic State or a successor group cannot be ruled out. Finally, the increasingly aggressive foreign policy postures staked out by Sheikh Mohammed bin Zayed Al Nahyan in the United Arab Emirates and Saudi Crown Prince Mohammed bin Salman will not soften if Iran signs a deal with the West. Indeed, the United Arab Emirates and Saudi Arabia would view any deal with significant constraints on Iran's overall regional strategy as an opportunity to expand their own influence, much like Iran saw the fall of Saddam Hussein as an opportunity to expand its influence in Iraq.