South Africans' Property Rights Are in Deep Danger, Here's How America Can Help 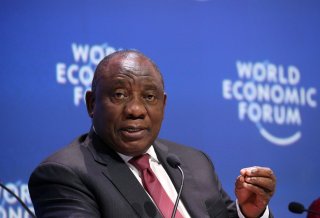 During his first official visit to Africa, U.S. Secretary of State Mike Pompeo warned against the South African government’s plan to amend the country’s constitution to allow for the economically illiterate policy of land expropriation without compensation. Speaking to the United Nations Economic Commission for Africa in Addis Ababa, Pompeo noted that such a policy “would be catastrophic for the South African economy and the country’s population.” Property rights and strong rule of law, he added, is necessary for the economic growth of all African nations.

Right now, the South African constitution mandates that if any property is taken away from its citizenry by the government, “compensation…must be just and equitable.” But South African president Cyril Ramaphosa and his African National Congress party are trying to change that.

Ramaphosa is pushing ahead with an amendment bill that would allow the government to simply take people’s property for “nil compensation” if the government took it for “purposes of land reform.” Considering that the end of last month saw the final day for public comment on the bill, it’s likely this constitutional change will be enacted in law later this year.

Ramaphosa has claimed that his expropriation plans will turn his nation into “the garden of Eden” and boost economic growth while reducing poverty. But this sentiment couldn’t be further from the truth.

By taking data from the Fraser Institute’s Economic Freedom of the World Report, I’ve split the 163 countries that the report analyzes into deciles based on the strength of their property rights and legal systems. After correlating these deciles with their GDP per capita (PPP, current international dollar), the importance of strong property rights becomes clear. 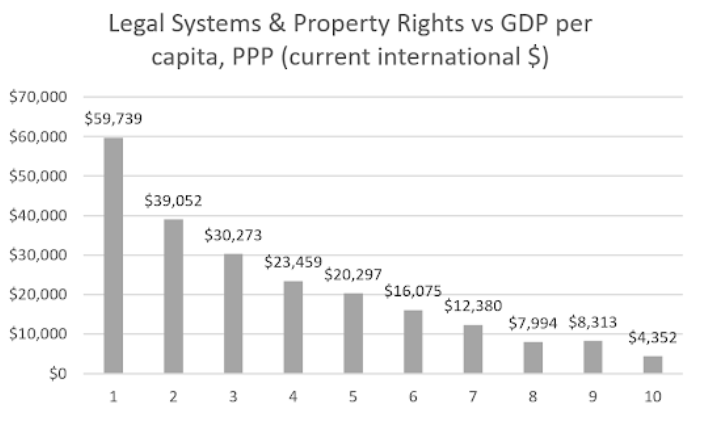 *GDP per capita data taken from WorldBank using 2017 data, the most recent year that the Fraser Institute has data.

Without property rights, citizens lack the incentive to innovate, produce, or invest. In other words, without the certainty of owning the fruits of your labor, people remain reluctant to risk the investment to improve their lot.

The Banking Association of South Africa (BASA), for its part, has already acknowledged the problems caused by the uncertainty of land expropriation. BASA’s Managing Director, Cas Coovadia, noted “the possibility of expropriation without compensation has already started discouraging essential investment by farmers and others into their properties,” which threatens to increase food insecurity. Too, expropriating land would “reduce the capacity of banks to extend credit, which is often used by entrepreneurs for personal development and to improve living standards.”

Despite BASA’s concerns, Ramaphosa seems to care little about the domestic resistance to the initiative. Fortunately, the United States can do something to prevent South Africa heading down this road of economic ruin.

President Trump should warn the nation that if it persists in pushing this bill, he could revoke South Africa’s membership in the African Growth and Opportunity Act (AGOA)—a trade act that grants certain Sub-Saharan African nations significantly enhanced access to the huge U.S. market.

In order to keep that access, they have to meet certain conditions. One of them, spelled out in Section 104 of AGOA, states that a nation in Sub-Saharan Africa is only eligible for membership in the trade scheme if it “protects private property rights…and minimises government interference in the economy.” Membership is determined annually and can be revoked “if the [U.S.] President determines that an eligible Sub-Saharan African country is not making continual progress in meeting the requirements described.”

In 2019, South Africa exported $7.8 billion worth of goods and services to America, and this figure would plummet if President Trump suspended South Africa’s membership of AGOA.

Considering South Africa will soon breach AGOA membership requirements, President Donald Trump should issue a stern, pre-emptive warning that the nation’s membership of AGOA is at risk. Hopefully, South Africa will choose another route and avoid the brutal economic consequences they’re about to bring upon their own heads.

Alexander C. R Hammond is the Policy Advisor to the Director General at the Institute of Economic Affairs, Senior Fellow at African Liberty, and a Young Voices Foreign Policy Fellow.