The Space Force Has Completed its First Mission 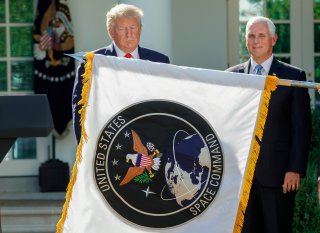 Since August 2002 there have been 83 launches of the United Launch Alliance (ULA) Atlas V rocket, while the ULA has conducted 138 launches, yet the one that occurred last Thursday was anything but routine – and not because of a technical issue that foiled the first countdown. The second attempt went off smoothly, resulting in what was the first mission for the newly formed United States Space Force.

The launch also occurred with a leaner staff due to the COVID-19 pandemic. Yet excitement had been building for days, with the 45th Space Wing taking to social media with the tweet, "Nothing stops the space launch mission" earlier in the week.

The rocket, which was outfitted with five strap-on solid rocket boosters and adored with the new Space Force seal, took off from the launch pad at Cape Canaveral Air Force Station Space Launch Complex. The mission was to deliver a $1.4 billion Advanced Extremely High Frequency (AEHF-6) satellite to orbit.

The Atlas booster separated as planned from the Centaur upper stage, which will take the satellite on the final leg of the journey. Six hours after launch ULA announced the success via Twitter, "Successful staging and ignition of the Centaur upper stage is confirmed! The vehicle now weighs a little more than five percent of its liftoff mass."

While this was the first mission for the Space Force, this was the sixth and final satellite of the AEHF constellation, which provides secure, jam-proof voice and data communications for the U.S. national leadership as well as for the U.S. military. This also provides communications for international partners that include Australia, Canada, the Netherlands and the United Kingdom. The ULA has said, the "AEHF satellites provide global, survivable, protected communications capabilities for strategic command and tactical warfighters operating on ground, sea and air platforms."

The total cost of the AEHF program was reported to be $15 billion, and the sixth of the AEHF satellites – which were all manufactured by Lockheed Martin – are replacing the older Milstar constellation of military communications satellites.

AEHF-6 will now undergo approximately 120 days of orbit-raising operations, which will be followed by another 30 days of on-orbit testing. When those tests are completed, satellite and Space & Missile Systems Center (SMC) will transfer the control authority to U.S. Space Operations Command.

The deployment of the sixth satellite will ensure that the AEHF constellation will remain in service beyond 2030.