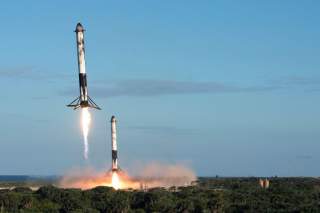 The third launch of the SpaceX Falcon Heavy features a variety of payloads from science experiments and satellites, but along for the ride are more than 150 humans, well a small part of them.

Celestis, a company that has been sending symbolic portions of human remains on space flights since 1997, has partnered with General Atomics to hitch a ride on the Orbital Test Bed satellite alongside NASA’s new Deep Space Atomic Clock, a solar array for the U.S. Air Force and other customers.

The remains of 152 individuals have been installed on the small satellite, which is slated to orbit the Earth for 25 years.

The cost advertised for the trip to space, dubbed the Heritage Flight, on celestis.com is $4,995 a person.

Celestis also advertises its Earth Rise Service for $2,495, in which cremated remains or DNA get sent into zero G space and return to Earth. The Heritage Flight is the next level up, the Earth Orbit service.

Beyond that is the Luna Service to the moon’s surface and Voyager Service into deep space for $12,500 each.

This will be the 16th overall launch for Celestis, and the seventh into Earth orbit. The company did send the remains of one person to the moon in 1998.

It worked with friends of planetary geologist Eugene Shoemaker to place some of his remains on the NASA Lunar Prospector, which launched from Cape Canaveral Air Force Station on Jan. 6, 1998 and made impact on the moon on July 31, 1999.

A second lunar surface flight is planned for 2020 with Celestis contracting with the company Lunar Express, a commercial company approved by the U.S. for a lunar landing mission.

A deep space mission is also in the works, and included on that flight will be some of the remains of Star Trek creator Gene Roddenberry.