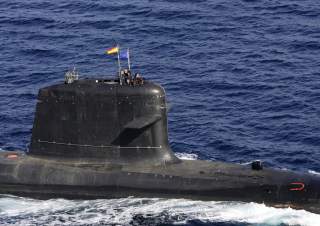 On July 18, the Spanish newspaper El País reported that Spain’s four advanced S-80 submarines under construction had proven too big to fit in their docks at Cartagena. The naval base, located on the Mediterranean Sea in southeastern Spain, has been the home of the Spain’s submarine fleet since 1918, but its docks measure three meters shorter than the boats they will need to accommodate.

This is only a minor by-blow in a protracted a series of expensive setbacks for the Spanish super-submarine. The S-80’s per-unit cost has risen from the originally projected €439 million to €978 ($1.14 billion) and delivery has been delayed nearly a decade from 2013 to 2022, illustrating how early missteps in defense programs can cause spiraling cost overruns and delays.

The Spanish Navy—the Armada—currently operates three French-built Agosta-class S-70 submarines commissioned in the mid-1980s. A fourth, S-72 Siroco, was decommissioned in 2012 due to Great Recession-related budget cuts. In the 1980s, Spain began working with French shipbuilder DCN to create a successor, the S-80, that would boast long range for blue water operations, land-attack cruise missiles and facilities to deploy naval special forces.

Spain is actually a little-known pioneer of submarine design. Spaniard Isaac Peral developed one of the first electrically-powered submarines late in the nineteenth century—and before him in 1864, Narciso Monturiol (of Spanish-Catalonian descent) pioneered the first submarine to use a non-air-breathing combustion engine, the Ictíneo II. For the S-80s, Spain wanted to return to the concept of Air Independent Propulsion (AIP), as affordable diesel-electric submarines were vulnerable due to having to surface or snorkel every few days to run their noisy, air-breathing diesel generators to recharge their batteries.

Fuel cells are arguably the most advanced form of AIP in terms of stealth and output, though also the most technically challenging and potentially explosive. The Spanish system feeds bioethanol fuel and liquidized oxygen into a reformator, which outputs hydrogen to feed a fuel cell. At the same time, carbon dioxide-byproduct is ejected into the water via a special waste extractor that minimizes bubbles. There is also a diesel generator to help sustain higher speeds.

In theory, the bio-ethanol AIP system could allow the S-80 to cruise for four weeks underwater at sustainable speed of four knots, at which pace it would have a maximum range of 12,500 nautical miles (14,300 miles). At flank speed, the submarine could still attain twenty-two knots submerged (twenty-five miles per hour). Highly automated systems would allow the submarine to operate with a crew of only thirty-two, with additional room for eight naval commandos of Spain’s Special Naval Warfare Force (FGNE) and supplies for fifty to sixty days at sea.

The S-80 is armed with six standard 533-millimeter torpedo tubes that can launch up to twenty DM2A4 Seahake torpedoes which are guided via thirty-one miles of fiber-optic wire connected to the submarine, as well as Harpoon anti-ship cruise missiles. To scout out targets, the S-80 can call upon a dozen U.S.-built sonars of various types and a towed sonar array. The Spanish submarine will also be capable of attacking land targets hundreds of miles away with Tomahawk cruise missiles.

In addition to traditional acoustic stealth, Navantia has reportedly striven to reduce the S-80’s magnetic, infrared, visual and radar signatures. For example, the sub is propelled by a seven-bladed propeller designed to minimize cavitation.

The S-80 project seemed to be proceeding on schedule until 2013 when it began to undergo testing. Despite the S-80’s many advanced technologies, it soon turned out it suffered from an elementary design flaw: it lacked buoyancy. This is to say that the submarine was perfectly capable of submerging underwater, but it couldn’t be counted upon to get back to the surface!

Weight imbalances were culpable. An official incredibly told AP a ‘misplaced decimal’ point caused the designers to overshoot the submarine’s planned 2,300-ton displacement by 70 to 125 tons—possibly due to a failure to account for the weight of the Lockheed-built Submarine Integrated Combat System, which enables the sub to engage multiple targets simultaneously with torpedoes.

A team was hired from General Dynamics for 14 million euros. It concluded that the easiest way to fix the buoyancy issue was to lengthen the S-80 from 71 to 81 meters, which also increased the weight from 2,300 to 3,300 tons submerged!

Of course, the now eighty-one-meter long S-80 Plus submarines won’t fit in the seventy-eight-meter-long docks at Cartagena, apparently necessitating a €16 million expansion project. However, a Spanish defense official has also insisted that a dock-widening—not lengthening—operation had been authorized way back in 2009.

Spain formerly operated ninety-five-meter long Balao-class submarines out of Cartagena from 1959 to 1984, so it’s not clear that the facility is strictly incapable of accommodating the S-80 Plus. The submarines could be moored with their tails surpassing the length of the dock, or slanted in diagonally. However, this would leave them exposed to various kinds of mishaps, so some kind of lengthening seems likely.

However, there is another long-running, and much more serious, bug in the S-80 program: for years researchers have be unable to get the bio-ethanol AIP drive to work for the intended four weeks (they kept falling short at three) until a test in May 2018—but only with a reduced-scale twenty-five-kilowatt prototype. As a result, the AIP drive will not be ready for installation until the third boat is deployed in 2026, while the first two will receive AIP drives for their 2032 refit. In effect, the lead ships of the class will lack their key defining technology for at least a decade, a fate similar to Russia’s failed attempt to build AIP-powered submarines.

Currently, the S-81 Isaac Peral is scheduled to enter service in 2022, with the Narciso Monturiol, Cosme Garcia and Mateo Garcia de los Reyes following from 2024 to 2027. An option for two more S-80s is under consideration. Spain has also sought to market the S-80 abroad, but its technical woes already scuppered promising opportunities to sell the sub to Australia and India.

The S-80s may still perform both long-range sea control and expeditionary missions effectively, thanks to their endurance and added facilities for commandos and land-attack capabilities. If the bioethanol AIP drive can be made to work, the S-80 could end up serving as very stealthy, far-ranging guardians of Atlantic and Mediterranean waters around Spain—though ones built at nearly twice the price of peer-AIP submarines like the German Type 212 due to the mistakes made in development.