Special Forces Can Conduct Undersea Ops Without Making a Sound 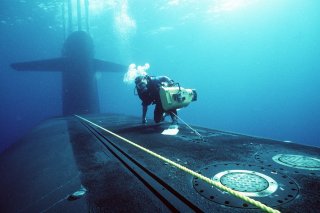 It is called a Lock Out Trunk: a submarine innovation that enables Special Operations Forces (SOF) to quietly conduct clandestine undersea missions without needing to surface or generate a large acoustic signature.

The Lock Out Trunk is a specially configured compartment near the top of a submarine that can fill up with water and then empty as needed, a situation which allows special mission divers such as Navy SEALs to put on scuba gear, submerge and then exit the submarine quietly.

Upon return, the divers can enter a chamber full of water which is then emptied, enabling the seals to remove their scuba equipment and breathe. The compartment was built in and added during Navy construction of the now operational Virginia-class attack submarine Block III variant.

There are many advantages with a compartment like this, as SOF forces can exit and return as individuals or small secret missions intended to avoid enemy detection. Perhaps a group of divers needs to conduct secret undersea reconnaissance in hostile territory, scout undersea and surface targets, perform fast-attack quick-strike missions or swim to an enemy shoreline without being detected to perform highly secret land war missions ashore.  Targeted attacks, secret rescue missions, or hostage recovery operations can all be performed with a much smaller and therefore much less detectable acoustic signature.

All of these potential mission scenarios figured prominently in recent training in the Mediterranean Sea during which Navy SEALs conduct combat preparation exercises using the “Lock Out Truck” on the USS New Mexico.

“The combined clandestine capabilities of Naval Special Operations Forces and submarines provide an asymmetric advantage that bolsters the Navy’s lethality from the sea,” Rear Adm. Anthony Carullo, Director of Maritime Operations, U.S. Sixth Fleet and Commander, Submarine Group 8, said in a Navy report. “This training demonstrated how the submarine force can adapt mission sets for theater commanders, providing a variety of options to address multi-domain challenges.”

The training raises some interesting thoughts, given the large extent to which undersea launched Special Operations Forces may in recent years primarily been thought of in terms of hostage rescue, counter-piracy, counterterrorism, or small hit and run or fast-attack missions along an enemy shoreline. However, given the much-discussed great power competition era, there would likely be a wide range of interesting new mission scenarios in which Navy SEALs might operate secretly from a submarine against a major power, large enemy force. For example, given the rapid technological advances in sonar sensitivity and other kinds of emerging undersea detection technologies, submarines and even undersea drones are more challenged to avoid complete detection in some cases. A diver, however, might emit an acoustic signature somewhat similar to a large fish, dolphin, or shark and therefore be more likely to avoid detection.

Perhaps SEALs could plant mines, move ashore undetected by enemy sonar or other air and land sensors or simply conduct reconnaissance or scout missions in undersea areas much less accessible to submarines, surface ships, and some drones.