The Speed of Warfare Is Getting Faster—Thanks to Artificial Intelligence 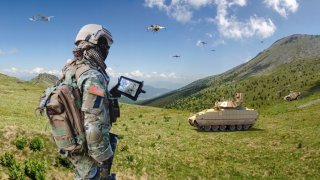 The tactical advantages of AI-enabled warfare and weaponry may seem far too numerous to cite, yet the majority of them pertain to one clear, simple concept—speed.

The speed of decision-making, when mere seconds can decide life or death in warfare, is being completely redefined through the advent of artificial intelligence (AI). AI-empowered computers can take pools of incoming data from otherwise disparate sensor streams of information, organize and perform analytics on the information, and use it to solve problems, make determinations and recommend courses of action.

“We're trying to reduce the decision time and we're trying to reduce the cognitive burden on the commander on the battlefield. If you look into the future, the battlefield will be more expansive. Decisions will be required more rapidly,” Maj. Gen. Ross Coffman, Director for Next-Generation Combat Vehicles Cross-Functional Team at the Army Futures Command, told the National Interest in an interview.

AI-capable algorithms are only as effective as the scope of the database they draw from allows, so much of the cataloged information can at times pertain to previous instances of elements of history relevant to the current matters being analyzed.

The concept is to utilize the attributes and faculties unique to human cognition in the most optimal way by leveraging high-speed analytics and AI-capable computing to perform otherwise time-consuming procedural tasks. The intended effect is often described as easing the “cognitive burden” to better empower battlefield commanders with an ability to make decisions on an exponentially faster timetable.

Various applications of AI and Machine Learning were explored recently at a Northrop Grumman sponsored live-fire event in Arizona as a way to expedite the targeting process and greatly decrease the time needed to find enemy targets, identify them and quickly decide which weapon or “effector” is most optimal for destroying the target.

“We use that to help the gunners identify ground and air targets because as you know, at the extended ranges, the human eye cannot see the target or identify it. So we use machine learning to amplify the image,” Rob Menti, Business Development Director at Northrop Grumman, told the National Interest during a Bushmaster Users Conference Demonstration this past October demo in Arizona.