The Springfield XD(M): A Better Gun Than Glock or Sig Sauer? 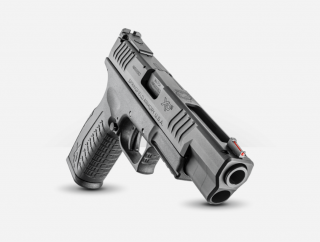 The Springfield Armory XD(M) Competition Series of handguns has been getting a lot of attention lately, and for good reason. The accuracy alone makes gunslingers around the world sit up and take notice. To sweeten the pot, SA throws in three magazines, a cleaning brush, a loading tool, three exchangeable backstraps, a gun lock, an over-the-waistband paddle holster, and a magazine holster for those two extra mags. It’s like gun Christmas. If you’re a competition shooter or just interested in a fun new toy, read on to check out the other amazing attributes of the XD(M) series.

The XD(M) is designed specifically for competition shooting right out of the box, so it comes as no surprise that this gun is extremely accurate. I managed an average of 1.5-inch groupings at fifteen yards, no problem. The low-profile, reduced-glare rear sight and the fiber-optic front sight allow for fast and accurate target acquisition and the 5.25-inch barrel provides an increased and more accurate sight picture. The notched all-terrain grip and high-profile beavertail allow for a tight, secure grip. SA also includes three exchangeable backstraps for adjustable grip comfort—like the Glock 19 Gen 4. The only way this gun jumps out of your hand is if you throw it. Each XD(M) barrel is hand-fitted to each individual pistol, so the parts fit flawlessly and work smoothly to produce fast, accurate shots each time you fire. Whether you are a novice shooter or a hardened competitor, this gun will hit whatever you aim it at.

Once again, the superb mechanics and sleek construction of this gun have bumped the XD(M) up the ranks of quality handguns. As a competition gun, it was paramount that SA produce a gun that a competitor can rely on consistently to fire low-velocity competition ammo. SA accomplished this with the Lightning Cut, a three-inch cut-out on the top of the slide which allows for a faster cycle by reducing reciprocating mass. This isn’t to say that the XD(M) can’t handle a wide variety of ammo, though, because it performs with equally well with range ammo like Tula 115 gr, Remington UMC. As far as I can tell, there are no problems with failure to feed, failure to eject, or misfire. No matter the situation, this gun will not let you down.

The XD(M) handles like a dream. This striker-fired pistol is well-balanced and fairly light for its size. Along with the rest of this sleek design, the Lightning Cut on the slide goes a long way to trimming down the fat. This series of guns features a grip safety, and internal firing pin safety, a trigger safety, and a loaded chamber indicator on the top of the gun. There is an accessory rail located in front of the trigger guard that can accommodate any standard light or laser. There is a mag release located on both sides of the grip. The mag release, slide lock, and takedown lever are all easy to operate. The serrated slide is easy to grasp and the contoured frame allows for a comfortable, secure hold. I love the way the XD(M) handles and I recommend that you test one at the soonest opportunity.

The XD(M) features a safety blade trigger with a clean break and a noticeable reset. Some people have complained the trigger is the only part of the XD(M) that isn’t competition ready, but SA counters that most people like to customize their triggers, so really it just comes down to preference. SA did, however, improve on the trigger assembly when they released the XD(M) Elite; the Elite series features a new flat-faced trigger with overtravel stop they’ve named the Match Enhanced Trigger Assembly (META™) System.

The XD(M) Competition Series comes with three ten-round mags (.45 ACP) or three nineteen-round mags (9mm), depending on which variation you prefer. Just like everything else about this gun, reloading is easy and straightforward. Just locate the mag release on either side of the grip, catch the mag, reload, and then insert into the mag well. This is a competition gun, so it’s designed to take low-velocity rounds, but it can handle any ammo suited to the caliber.

With an overall length of 8.3 inches and a weight of thirty-two ounces, the XD(M) is a surprisingly light and comfortable pistol. It handles great and the lightweight slide makes the gun feel balanced. Even when you add an accessory to the rail, the XD(M) seems to counterbalance the weight and allow for easy maneuverability.

The XD(M) features a one-piece recoil system with a full-length guide rod. This is great news to those of you who like to change out your recoil springs. The XD(M) is already a low-recoil handgun, and with its fast cycle-through you barely even notice a hitch, especially with reduced-power loads.

The XD(M) series runs at about $775 MSRP. Honesty, for the quality of the gun and the case full of goodies Springfield throws in, you can’t get a better deal.

The Springfield Armory XD(M) Competition Series is a seriously great set of guns. It’s highly accurate, extremely reliable, and its streamlined design allows for a balanced, lightweight hold. Whether you are looking for a home defense weapon or need a new competition piece, definitely try out the XD(M). You won’t be disappointed.