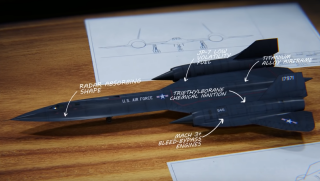 Throughout its nearly 24-year career, the Lockheed SR-71 Blackbird Mach 3-strategic reconnaissance aircraft remained the world’s fastest and highest-flying operational aircraft. From 80,000 feet, it could survey 100,000 square miles of Earth’s surface per hour.

So it comes as no surprise if, thanks to its astonishing flight characteristics, the aircraft has set numerous speed and altitude records throughout its career.

Nevertheless, the Blackbird wasn’t an easy plane to fly as SR-71 pilot Brian Shul recalls in his book Sled Driver. “There were a lot of things we couldn’t do in an SR-71, but we were the fastest guys on the block and loved reminding our fellow aviators of this fact. People often asked us if, because of this fact, it was fun to fly the jet. Fun would not be the first word I would use to describe flying this plane—intense, maybe, even cerebral.”

However according to Shul “there was one day in our Sled experience when we would have to say that it was pure fun to be the fastest guys out there, at least for a moment.

I’ll always remember a certain radio exchange that occurred one day as Walt (my back-seater) and I were screaming across Southern California 13 miles high.

We were monitoring various radio transmissions from other aircraft as we entered Los Angeles airspace.

Though they didn’t really control us, they did monitor our movement across their scope.

I heard a Cessna ask for a readout of its ground speed.

We weren’t the only ones proud of our ground speed that day…as almost instantly an F-18smugly transmitted, ‘Ah, Center, Dusty 52 requests ground speed readout.’
There was a slight pause, then the response, ‘620 knots on the ground, Dusty.’

As I was thinking to myself how ripe a situation this was, I heard a familiar click of a radio transmission coming from my back-seater. It was at that precise moment I realized Walt and I had become a real crew, for we were both thinking in unison.

‘Center, Aspen 20, you got a ground speed readout for us?’

No further inquiries were heard on that frequency.”