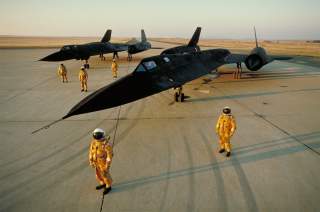 As an applicant, the SR-71 selection process seemed mystical to me. From the “inside,” however, it was a very methodical screening process designed to choose the best crews with the aptitude to fly extremely sensitive reconnaissance missions around the globe. After the applicant put his package together, with all of his Officer Efficiency Reports, Stan/Eval check rides, endorsements, recommendations, biography, flying time history, etc., it was sent to the 9th Wing’s Crew Selection Office, in charge of screening and maintaining the applicants’ records. The application process allowed current SR-71 crews at Beale to look over each applicant’s file and make comments as to their suitability. There was no doubt that the firsthand endorsement from an SR-71 crewmember helped an applicant’s chances of getting selected for the interview and physical. After that, he was on his own.

At Beale, a selection board convened whenever the SR-71 squadron commander determined a new crew would be needed. He was the one individual whose responsibility was to look into the future of his crew force manning and decide if and when another crew would be needed. The board typically met at least once every six months to select one or more crew positions that needed to be filled about seven to nine months down the road. The selection board was composed of all the key officers at Beale. The pilot and RSO applicant folders were placed in separate piles, which contained anywhere from five to ten applications for each position. Board members sat around the table, and all the folders were passed out. Each folder was reviewed in detail by all board members, every board member taking notes on each applicant.

Each applicant was then discussed by the entire board. It was as fair and unbiased as a selection process could be. Board members ended up selecting what was thought to be the best of the best. Over many years of selecting crewmembers, I came away with one observation—the more recommendations an applicant had from general officers, the less likely were his chances of getting into the SR-71 program. We wanted endorsements from officers who had firsthand knowledge of the applicant’s abilities and airmanship skills—not how good he looked or how well he could push papers. Flying skills rather than politics were the name of the game!

The basic hiring philosophy was to invite the individuals we thought we would like to hire and then look to see if there was any reason not to hire them. In the end, the selection board chose a pilot and/or RSO to bring to Beale for a week of evaluation and interviews. Sometimes, even the informal interviews had dire consequences for an aspiring candidate.

One applicant was at the Beale Officers’ Club on the final night of his evaluation process and had a little too much to drink during happy hour. The old axiom “loose lips sink ships” came true for him. He ended up criticizing SR-71 crewmembers for having their hair too long and not meeting Air Force standards. He might have been right, but he didn’t make it into the program. Another applicant became an obnoxious belligerent, so he wasn’t hired either.

Later on, when I became part of the interview process, my primary objective was to find out why they wanted to apply for the SR-71 training program. After posing a few probing questions to the applicant, it usually became obvious to me when he was using the high-visibility SR-71 program as a springboard to help launch his Air Force career to greater heights. I had little patience for this type of aircrew mentality, and in a heartbeat gave him a “do not recommend” rating. We were looking for candidates who had something to contribute to the SR-71 program—not what they could get out of it. The formal interview was also a good time to let each applicant know about the extensive Temporary Duty (TDY) commitment SR-71 crews incurred. If the applicant were married, now was the time to be sure he clearly understood that he wouldn’t be seeing much of his family and learn how he felt about it. After each formal interview, a comment sheet was filled out on the applicant, as well as a recommendation to hire or not to hire.

Each pilot applicant received a minimum of two evaluation flights in the T-38 with either the squadron commander or an SR-71 stan/eval pilot. We were evaluating the applicant’s general airmanship skills and his ability to stay ahead of the aircraft, a skill crucial to flying the SR-71 at two thousand miles per hour. A T-38 flying evaluation form was filled out on each candidate, becoming part of his selection board records.

Because the SR-71 simulator program was a vital part of the training process, we gave the applicant an SR-71 simulator evaluation to see if he was capable of handling the most basic tasks without falling flat on his face. We knew from his application package how well he performed in aircraft he had flown but needed to see how he would cope under the stress of flying the SR-71. He received a short but intense briefing from the instructor on the cockpit layout and parameters of the mission to be conducted during the evaluation. The instructor would eventually saturate the prospective pilot or RSO with a whole slew of tasks, evaluating his capability to perform under stress in a completely foreign environment. For some candidates, the SR-71 simulator was overwhelming, while others took things in stride. A simulator evaluation form was filled out on each applicant.

One of the unspoken reasons that kept many good Air Force aircrews from applying to the SR-71 program was the extensive physical examination. Originally, applicants had to take the equivalent of an astronaut’s physical at the Brooks Aerospace medical facility in San Antonio, Texas. In some instances, physical problems were found that permanently grounded several pilots. If you ever want to stop an Air Force pilot from doing something, just tell him it “might” permanently ground him from ever flying again. As soon as the word got around about the physical exams for the SR-71 program permanently grounding applicants, many airmen became reluctant to apply, either because they had something wrong with them that only they knew about, or they were afraid something might be discovered during the physical exam. Many good aviators were unwilling to take such a gamble. “Betting your wings” was something to joke about, though deadly serious in the application.

During the early ’70s, the physical exam was modified to an expanded annual Air Force aircrew physical given at Beale. It required an extra day at the Travis AFB (California)hospital doing various tests that Beale was not equipped to handle. It included treadmill testing of the heart (akin to a modern stress test), an electroencephalogram test of the brain, a lung capacity test, glucose tolerance testing, extensive blood tests, sinus X-rays, and a one-hour interview with a “shrink.”

During the interview with the shrink, many questions were asked about family life, Air Force background, and why the applicant wanted to fly the SR-71. All of this probing was designed to put the pilot at ease and listen to him talk about things close and familiar to him while the shrink tried to determine if the applicant would be a sound and stable SR-71 crewmember. The program demanded level-headed crews who knew how to apply and follow very specific rules. It was important to weed out anyone who just might try something stupid or off the wall while flying highly sensitive reconnaissance missions in unfriendly airspace.

Many fighter pilots consider themselves as God’s gift to aviation and sometimes have an ego so large they might do something foolish. The SR-71 program demanded that you fly the plane under total control of your emotions; if your ego ever got the best of you, you could easily create an international crisis, find yourself in newspaper headlines, or embarrass the United States president, government, or Air Force. Under normal circumstances, there is little room for improvising while flying highly sensitive reconnaissance missions around the globe.

The final selection was often informal and proceeded quickly because we were discussing only one or two prospective aircrews at the most. As expected, most of the discussion revolved around how well the applicant performed on the T-38 flights, simulator mission, interviews, and physical exam. If the candidate was not accepted for SR-71 training, a polite letter was sent to him from the squadron commander restating that the program is extremely competitive, and to be chosen for the interview process is an honor in itself.

After the selection board voted “yes” on a particular applicant, he received a phone call from the squadron commander welcoming him into the program and establishing the timing for his training to begin. It was also a good time to let him know he faced a grueling ten-month training program that had no guarantees with it. When I received my letter of acceptance in March 1974, I was well aware there were many hurdles to surmount.