SR-72 Darkstar: The Mach 6 Monster That Could Change Everything 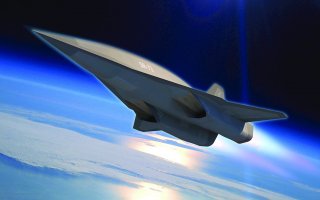 More than fifty years after its maiden flight in 1964, the SR-71 Blackbird remains the fastest manned aircraft of all time. With the purpose of its creation—namely, high-altitude aerial photography—largely having been taken over by satellites, the need for a plane with a similar mission is uncertain.

However, this has not prevented the U.S. Air Force and Lockheed Martin from examining how the SR-71, or a derivative, could be made to go even faster. Enter the “Darkstar”—or, alternatively, the “Son of Blackbird”—the SR-72.

So far, the SR-72 exists only on paper; none of the aircraft have yet been built, let alone flown. With that said, if Lockheed Martin’s plans come to fruition, the unmanned aircraft could travel at speeds of up to Mach 6, or around 4,500 miles per hour—nearly twice the speed of the parent SR-71.

This massive boost in speed is (hypothetically) due to a new turbine-based combined cycle (TBCC) propulsion system. This, combined with an existing dual-mode ramjet, or “scramjet,” would have allowed it to travel far faster than any other plane, allowing it to completely circle the globe in a few hours and quickly deliver payloads to anywhere in the world.

But could it actually work? The jet has been discussed since 2013, and although Lockheed has insisted that progress was being made - announcing in 2017, for instance, that the jet would be in early development by the early 2020s and would be ready to fly by the early 2030s—so far these targets do not appear to have been met.

One obstacle to the plane’s development, which Lockheed Martin acknowledged in 2018, was the immense technological demands that would be required to design and manufacture the plane.

Lockheed Martin has not announced any new details on the project since, and difficulties in maintaining global supply chains with the advent of the COVID-19 pandemic have probably instituted additional delays. However, the company maintains that the aircraft could see flight in 2025.