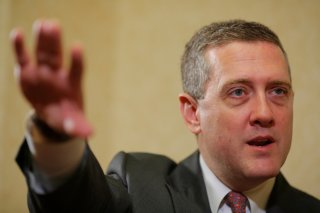 Such measures will also cause a 50% drop in gross domestic product, Bullard said in a Bloomberg interview published Sunday. He also asked why officials are purposely shuttering entire industries and the economy over a virus.

“It is totally stupid to lose a major industry because of a virus,” Bullard said. “Why would you want to do that?”

Even so, the Federal Reserve should be pulling out the works to prevent the damage, he added.

“Everything is on the table,” Bullard said of the measures the Fed is considering. “There is more that we can do if necessary … There is probably much more in the months ahead depending on where Congress wants to go.”

Meanwhile, companies are laying off people at astronomical rates, according to a March 18 Politico report.

Almost 8,000 Americans applied for unemployment in Connecticut, while Ohio saw 45,000 new laid off workers in a week. Unemployment websites in Kentucky, Oregon and New York crashed over the weekend as fear about the virus’ impact becomes more acute.

President Donald Trump hinted Monday that he might revisit the administration’s coronavirus strategy amid the economic downturn.

“AT THE END OF THE 15 DAY PERIOD, WE WILL MAKE A DECISION AS TO WHICH WAY WE WANT TO GO!” Trump told his Twitter followers.

The White House has not yet responded to the Daily Caller News Foundation’s request for comment about Bullard’s content and whether the Trump administration is considering a different tactic.

The U.S. Federal Reserve Bank announced Monday that there will be $300 billion in new financing for small businesses, with the U.S. Treasury supplying $30 billion in equity.

“The Federal Reserve is committed to using its full range of tools to support households, businesses, and the U.S. economy overall in this challenging time,” a statement accompanying the announcement read.

The New York Times and The Wall Street Journal also ran editorials suggesting the country’s strategy should be reconsidered.

“This won’t be popular to read in some quarters, but federal and state officials need to start adjusting their anti-virus strategy now to avoid an economic recession that will dwarf the harm from 2008-2009,” TheWSJ’s editorial board wrote Thursday.