Stalingrad: One Bloody Battle. Two Epic Movies. Which One Is Best? 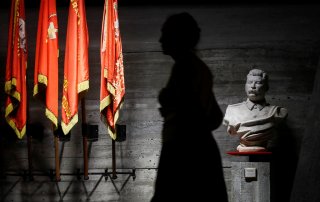 In 1993 the Germans made a movie about the 1942 Battle of Stalingrad—a bloody turning point in the vast, apocalyptic German invasion of the Soviet Union. The film is called, simply, Stalingrad.

In 2013 the Russians also made a movie about Stalingrad and also called it, well, Stalingrad.

One of the two flicks is an anti-war masterpiece that boldly inverts the tropes of war movies and, in doing so, captures the chilly, hellish reality of one of history’s most awful armed clashes.

The other is a silly, melodramatic celebration of war—and shot in terrible 3D, no less.

The German Stalingrad is the good one. The Russian version is awful—and by all accounts way more successful at the box office.

Directed by Joseph Vilsmaier from a script by Jürgen Büscher and Johannes Heide, the 1993 Stalingrad is easily one of the best war movies ever made … because in every detail it steadfastly refuses to glamorize the fighting.

Every aspect of the casting, dialogue, cinematography and score speaks honestly about the true experience of modern warfare—and of the terrible Eastern Front of World War II, in particular.

The siege and partial capture of the city of Stalingrad by the German army in September 1942 and its subsequent liberation by the Russians by January 1943 claimed as many as two million killed, wounded and missing. It was one of the costliest battles ever.

Where most war movies steadily expand in scale and excitement, gradually building up to their biggest battle as the climax, Stalingrad actually shrinks in scale over its 150 minutes.

Fast-paced, intricately detailed and expertly staged, the urban battle is thrilling to watch—for a few minutes. But then Vilsmaier’s camera lingers on the mounds of corpses and the weeping German survivors.

One of them, a young rifleman who was a little too quick to pull the trigger, cries out over and over, “I shot my friend! I shot my friend!” The soundtrack meanwhile grows quiet, offering no escape from the boy’s anguish.

And the dead bodies and tears keep accumulating for the next two hours as the film’s setting grows colder, vaster and more desperate. The Germans are freezing and starving as Soviet reinforcements close in. Ordered to block the Soviet advance, Musk, von Witzland and Rohleder dig into the snow and await the enemy tanks.

The camera steps back just far enough to frame the Germans’ pitiful defensive positions within endless expanses of snow. The Soviet tanks crawl slowly across the horizon, pivot, pause then continue their terrible advance. A young soldier states, simply, “Panzern,” his inflection conveying volumes of dread in two tiny syllables.

The tanks run right over the defenders. Vilsmaier’s staging is as deliberate, inevitable and ruinous as the battle and its results. One wild-eyed Wehrmacht trooper darts from his foxhole and through the fusillade to steal the warm winter boots off a Soviet corpse. Pulling on the footwear, the soldier smiles briefly as, behind him, bodies and pieces of bodies stain the snow red and tanks burn.

The few Germans who survive this skirmish—spoiler alert—later kill themselves, die of disease, are captured by the Soviets or freeze to death. Stalingrad’s final shot is its most intimate: von Witzland and another soldier, holding each other as they slowly succumb to the cold.

By stark contrast, the 2013 Stalingrad from director Fedor Bondarchuk and writers Ilya Tilkin and Sergey Snezhkin is less a war movie than a period romantic comedy for some reason set during the Stalingrad battle, and which happens to lack both believable romance and comedy.

The new film follows a small band of Russian recon troops led by Captain Gromov (Pyotr Fyodorov) during an attempted Soviet attack on German positions in the ruined city. Surrounded and cut off, Gromov’s soldiers immediately turn their attention to all falling in love with the same improbably attractive young brunette woman living in the building they occupy.

Meanwhile, German captain Kahn, played by the same Thomas Kretschmann who starred in the 1993 Stalingrad, busies himself falling for another improbably attractive Russian woman—this one blonde—living in a building near Gromov’s bunker.

What little story the 2013 Stalingrad bothers with exists mostly to justify these utterly unrealistic love affairs. The battle and the war are afterthoughts—which is odd, considering how many of the film’s 130 minutes Bondarchuk devotes to combat action.

Watch Gromov sneak up on German sentries and ninja-stab them with a twirling trench-knife maneuver. In slow-mo, blood spurting in three dimensions.

Regard in awe as the Russian scouts outrun a German mortar barrage. In slow-mo, debris hurtling at the screen.

The Russian Stalingrad is a terrible, terrible film—and a deeply immoral one for its utter neglect of its purported subject. A young man could be forgiven for watching Bondarchuk’s movie and believing that massive industrial war is a worthwhile, even sexy, pursuit.

The blonde woman even gets naked and happily shows no sign of starvation!

The key to understanding the 2013 Stalingrad is its misogyny. The men are men because they woo vulnerable young women and do battle with other men when the women are threatened with harm or dishonor.

That’s why this Stalingrad has such seemingly weird and random bookends. It begins and ends not in 1942, but in 2011 during the Tohoku earthquake in Japan, with burly male Russian rescue workers saving a blonde Anglo woman trapped under debris.

As though the bloodiest battle in history’s bloodiest war weren’t compelling enough.

But what’s most distressing is that the Russian Stalingrad earned many times its $30-million budget. The German anti-war masterpiece was profitable, but the Russian pro-war popcorn flick—ostensibly about the same subject—was a blockbuster.