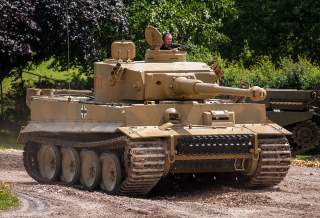 After the Red Army stopped the Nazis at the Volga, they would push the Germans back, relentlessly, for the next two years, culminating with the destruction of Berlin, the death of Adolf Hitler and the end of the war.

Since July 2012, the world has watched in horror as the once-beautiful and vibrant Syrian city of Aleppo has been transformed into a perpetual battlefield. Those killed in Aleppo, as well as throughout the rest of Syria during the civil war, are reported to be approximately 300,000.

As staggering as the death toll in these wars have been, it pales in comparison to what remains the world’s most barbaric city fight, the Battle of Stalingrad, in which an incomprehensible 1.9 million German and Soviet soldiers and civilians are estimated to have been killed in six months.

In June 1941 Hitler ordered a surprise invasion of the Soviet Union, and for most of the next year the German army routed the Soviet troops, capturing thousands of square kilometers of their country in the process.

In August 1942 the German Sixth Army had pushed all the way to the banks of the Volga River, near the industrial heartland of the USSR. Once captured, the Nazis could sever the Volga, and potentially destroy Moscow’s ability to continue fighting.

All they had to do was take one more city. Stalingrad.

The pre-war population of Stalingrad was 400,000. It was home to a key river port as well as numerous important war and civilian industries. Because the city bore the name of the leader of the USSR, Joseph Stalin, Hitler took particular interest in capturing the city as a personal hit on the Soviet leader.

Stalin likewise placed great importance on holding the city to prevent Hitler from capturing the city carrying his name.

Though Stalingrad carried significant military importance, the psychological emphasis both leaders placed on the city elevated it to a level of importance above perhaps even the capital city of Moscow. The price both armies were willing to pay to possess it transcended military utility and entered fully into the category of obsession.

Initially the Germans made substantial and rapid progress in conquering Stalingrad. The Nazis attacked the city and its defenders with almost uncontested bombardment from the sky, tanks, artillery, mortars and other heavy weapons. By early September 1942 the Germans were still making progress, but the rate of advance had slowed considerably.

As a result of the enormous bombardment, the city and its buildings had been pulverized into one giant heap of rubble. The Soviets began to develop defensive tactics that took advantage of the wrecked buildings, which ironically gave them advantages.

Nevertheless, by November the relentless German assault had pushed the Soviet line almost all the way to the Volga River. Both sides had endured hundreds of thousands of casualties at this point, and the barbarity of the fighting on both sides of the line had transcended all bounds of human behavior.

Right and wrong, morality and honor among combatants had ceased to exist. The battle had literally descended into an animalistic struggle to survive.

One particular Russian sniper, Anatoly Chechov, said of the time he took his first human life, “I felt terrible. I had killed a human being.”

But after time and the knowledge of how German troops had killed many of his countrymen, Chechov said when interviewed during the battle, “I started to mercilessly fire on them. I’ve become a barbaric person, I kill them. I hate them.”

To give just a glimpse into the Hell of the world that was the battle of Stalingrad, consider these few stories from both countries’ perspectives.

As described in detail in the excellent book by Michael K. Jones, Stalingrad: How the Red Army Survived the German Onslaught, on Sept. 14, 1942, the Germans had pushed almost all the way through the city to the Volga, a mere 200 yards from their objective. The Soviets were on the verge of defeat.

Because the German Luftwaffe had air supremacy in the skies, it was near suicide for any reinforcements or resupply to be ferried over the Volga during daylight. But because the Soviet commander of the 13th Guards Division believed that the Russian defenders near the river’s edge would not hold out until nightfall, he ordered his division to cross anyway, believing the battle and perhaps the war was on the line.

Gen. Alexander Rodimtsev led his troops onto the barges and started across the river. According to eyewitness accounts, the general’s boat was hit with a German bomb before reaching the far shore, killing most on board — but miraculously, he survived. Most of his men were not so lucky.

Albert Burkovski, one of the few Soviet defenders still holding on the Stalingrad side of the river, described the approach of the 13th Guards Division troops. “We were lying on the ground. Everything was on fire,” he said.

“The boats were being bombed and shelled. I saw a big barge — full of soldiers, with their big coats, grenades, sapper’s spades, ammunition and machine guns — go down right before my eyes.”

“There was a flash of flame, dark smoke enveloped the ferry, an explosion was heard, and immediately afterwards, a drawling scream … The ship was maneuvering, then a sheet of fire erupted on the upper decks; the force of the explosion shook the Volga. When it was over — and the smoke had cleared away — there was nothing, just waves where the ferry had been. The scene froze our blood.”

As Michael Jones noted, the Soviet troops shouldn’t have been able to hold the line. “The Germans occupied the high river embankment and brought overwhelming firepower to bear on the advancing Russians,” he wrote. “It did not seem possible that they could succeed — and yet they did. In ferocious hand-to-hand combat, Rodimtsev’s soldiers recaptured a key building from the Germans and secured the river crossing.”

For a graphic depiction of this action, see this excerpt from the 2013 Russian movie Stalingrad. The view from the German side was even more horrific.

In a WW2History.com interview, German survivor Helmut Walz described the dehumanizing effects inflicted on him during the house-to-house fighting in Stalingrad. Walz was in the midst of an assault on a certain Russian-held building when he came face to face with an enemy soldier.

He said he raised his weapon to shoot, but all of a sudden, “I saw little stars in front of my eyes. I looked to my right, and I ran my left hand over my face and a jet of blood comes out and my teeth flew out of my mouth.”

But his horror for the day wasn’t finished. As his friend bandaged Walz’s wounds, Walz looked up and tried to warn the friend that another Russian fighter was right behind him. But it was too late.

Shots rang out and his friend’s helmet “flew through the air and then I looked at him and I saw how he was shot in his head and how his head split. That’s the first time I saw a brain. On the left-hand side and on the right hand side there were parts of the brain, and in the middle there was water. No blood, but water. And he looked at me and he was standing on the soil with his wound.”

Scenes like those of the 13th Guards Division and Helmut Walz were repeated a thousand times over during the six months of the battle for Stalingrad.

I fought in high intensity combat during my 21-year military career, as well as participating in counterinsurgency operations against guerrilla foes. Yet without equivocation I confess that I cannot fathom, cannot even truly imagine, what the living Hell of Stalingrad combat must have been like.

It is frightening to consider how remorseless and vicious men can become when stripped of their humanity.

The carnage of the Battle of Stalingrad finally came to an end in February 1943, when the German Sixth Army Commander, Gen. Friedrich Paulus, surrendered the remaining 90,000 troops of his army to the Soviet forces.