Star Trek Shouldn't Be About the Military 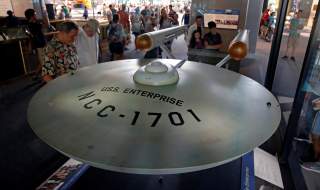 I love Star Trek. Growing up, I looked forward to sitting next to my father on the couch and watching the continuing adventures of the USS Enterprise. Jean-Luc Picard and his crew explored the galaxy, wrestled with Q and proved humanity’s basic decency. They used force as a last resort.

I remember Benjamin Sisko’s diplomatic and moral battles aboard the former Cardassian space station in the Alpha Quadrant. In one of the best moments in Trek history, Sisko betrayed the values of the vaunted Federation so he could save the lives of thousands.

(This article originally appeared at War is Boring in 2015.)

It was a hard choice, but he made it and I will never forget how Sisko stared at the camera, confessed his sins and told us he could live with it. I was 15 years old and the good guy on T.V. acted like the bad guy … but for the right reasons. I’d never seen anything like it.

So it is with restrained excitement that I welcome the news of a brand new Star Trek T.V. show coming in 2017. Trek belongs on T.V. and it’s been gone for more than a decade. But I’m scared because, let’s be honest, Star Trek hasn’t been itself for a long time.

What was once a wonderful, rich universe filled with stories about humanity exploring the stars, overcoming its baser nature and avoiding force has become a vehicle for weird, military themed action-adventure stories.

A lot of people, even the die-hard Trekkies I know, loved the J.J. Abrams-led reboot of Trek. I hated those films and not for the dull plot-rewriting reasons argued over in Trek forums across the Internet. Every reimagining and reboot will play with continuity — so I don’t care about Vulcan’s destruction, Spock’s romantic ambitions or Kirk’s stilted career.

The problem, for me, is that Abrams and screenwriters Alex Kurtzman and Roberto Orci used those plot deviations to change the very foundation and feel of the Star Trek universe. Abrams and company moved Starfleet and the Federation away from diplomacy, science and exploration and toward pre-emptive strikes, conquest and military conspiracy theories.

In the Abramsverse, Starfleet is a hawkish military bureaucracy more concerned with superweapons, existential threats and territorial disputes than keeping the peace. It’s not a Star Trek I’m interested in watching.

But it never bothered me much. Let’s face it, Star Trek movies — with a few exceptions such as Wrath of Khan, Undiscovered Country and First Contact — have always been awful. Television was where creator Gene Roddenberry’s world really shined. And now CBS is bringing that world back.

I hope the weird crypto-conspiracy military plots stay behind in the films.

There’s ample reason to hope it will. We know that the new series is unrelated to the film franchise and will follow an all new cast of characters. Reboot screenwriter and T.V. veteran Kurtzman is involved but not Orci. And that’s good, because Orci is to blame for Trek’s current militaristic tone.

Orci, to put it simply, is a conspiracy theorist and a 9/11 truther — and he’s the reason Into Darkness was such an incomprehensible mess. Thankfully, his name isn’t attached to the upcoming T.V. show.

Into Darkness has all the hallmarks of a great conspiracy story — a false flag attack on a Starfleet black ops site, a hawkish admiral attempting to start a war, a terrorist secretly in league with the government, a plot that makes little logical sense and an obligatory dedication to the troops before the credits roll. But it doesn’t make for good Star Trek.

We know Orci is behind most of this stuff because he isn’t shy about his views on social media. “Oh, so you think it’s a coincidence that the fire department commander said they were going to ‘pull it’ just before World Trade Center Building 7 collapsed, despite it having never been hit by a plane?” he once wrote in a now-deleted tweet.

In another paranoid turn, Orci attacked fans online who didn’t like his take on Trek.

Star Trek belongs on T.V., because the medium allows for the longform and groundbreaking science fiction stories that defined the series. The original show gave visionary writers Harlan Ellison and Theodore Sturgeon a platform on broadcast television. In the 1960s, it depicted a world in which race and gender were not barriers to accomplishment.

In The Next Generation’s opening story, the godlike series antagonist Q demanded the crew of the Enterprise prove humanity worthy of sentience. Picard and company spent the next seven years exploring the stars, proving Q wrong and showing humanity’s basic decency in the face of the crushing indifference and hostility of the universe.

Deep Space Nine took Trek and television to places both had never been before. DS9 dealt with war, religion and the moral gray areas at the Federation’s fringes. It was a story told over the course of seven seasons, complete with character arcs and high drama. Bad guys acted like good guys, good guys acted worse and every victory felt conditional.

In today’s era of prestige television shows such as Fargo, Mad Men and everything on HBO it’s easy to forget the barren cultural landscape of ‘90s-era primetime television. The ’90s was a decade when episodic police procedurals such as Law & Order and medical dramas such as ER and Chicago Hope routinely won Emmys.

This was a time when no major network would consider airing a miniseries based on a Coen brothers movie, a story of a chemistry teacher turned meth dealer or a cop descending into madness while investigating occult murders.

The first episode of DS9 shows its hero Sisko grieving the death of his wife while he explains the concept of linear time to an alien entity with no concept of human consciousness. It was heady stuff in 1993 and the series only grew in complexity and sadness.

This is the legacy any new Trek T.V. show must live up to. One in which military actions are a last resort — not a first response. Where the universe tests humanity and a sense of wonder pervades all. A world where substance overrides spectacle, not the other way around.