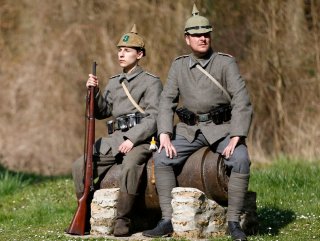 A long time ago, in a land far, far away (at least from the United States) there were stormtroopers who fought in the service of an Emperor who was considered quite sinister and evil (at least by his enemies). This may sound familiar—but these stormtroopers weren’t fighting for a Galactic Empire, but rather for the German Empire during the middle and end stages of the First World War.

These troops utilized new tactics and weapons in an attempt to break the static trench lines, and were in many ways the forerunners to modern day Special Forces units.

The “Sturmtruppen”—German for Stormtrooper—were an experimental type of soldier who grew out of a small unit, originally called the Sturmbteilung (assault section), which was formed in 1915. Within a year it was enlarged to Sturmbatallion (assault battalion) and it developed a procedure called “infiltration tactics.”

The Sturmtruppen didn’t take part in the mass waves of attacks along a wide swath of the frontline that was so familiar with World War I, and instead these well armed men who used an aggressive fighting style that involved striking at key points to open gaps in the enemy’s defenses, seep into the rear and overrun artillery batteries and command posts. This then enabled the follow-up waves of regular troops to attack the frontlines. These units have been described as the first “Blitzkiergers,” and they were armed with some of the latest and most innovative equipment including flamethrowers and the newly developed MP-18 submachine gun. They also carried satchels of hand grenades as well as primitive but brutal melee weapons including maces, clubs and even sharpened shovels.

While the Sturmtruppen is usually associated with the later German Army’s tactics, notably the “Kaisershclacht” spring offensive of 1918, the concept had been developed far earlier in the war by Captain Willi Rohr, who had joined the army at age fourteen and served in the specialized Jäger (“Hunter”) units—the specialized troops that operated in forests and woods. Many of those men had been hunters, gamekeepers and more than few probably poachers as well.

In March 1915, just eight months into the war, a Jäger unit was charged with eradicating an enemy bunker and machine nests with portable 37mm artillery pieces. It was a novel concept and it failed at first, but Rohr took command of the battered unit and changed tactics from engaging in head on attacks across the front to raids at key positions.

A year after organizing the first Sturmtruppen units, these men took part in the Verdun offensive, and later punched through the Italian lines at the Battle of Caporetto and retook ground captured by Allied tanks at the Battle of Cambrai. So successful were the tactics of the Sturmtruppen that other armies copied their methods and even equipment—the Russians nearly broke the Austrian lines during the Brusilov Offensive with small assault units, while Canadian and Australian shock troops smashed German positions along the Western Front during the final year of the war.

In the end however, the Sturmtruppen were just too few to really alter the course of the First World War, but changed infantry tactics forever.

After the war the concept of “stormtroopers” lived on in a truly insidious incarnation. The unit evolved into the paramilitary wing of the Nazi Party, which adopted the name Sturmabteilung or SA. It was meant to conjure up images of elite warriors, but in reality these were street thugs—and like the science fiction version they helped bring to power a regime of evil incarnate.