Star Wars Wants Its Droid Back: This Nazi German Tank Is Almost Too Strange To Be Real 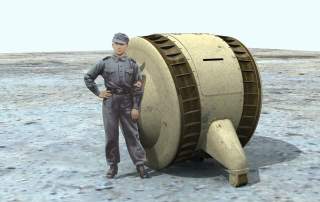 Key point: The tank lacks official records, but we know at least one existed.

The Star Wars prequel movies featured various monowheel robots and vehicles amongst its various fantastical elements. After all, who in real life would be crazy enough to invent such impractical designs?

Why, the Nazis, of course!

The unique Kugelpanzer, or “ball tank”, was built in Germany and at some point shipped over to Japanese-occupied China. The sole prototype was then captured by the Russian Army in 1945 during its invasion of Manchuria. Plated in 5 millimeters of steel, the Kugelpanzer rolled on massive rollers 1.5 meters in diameter, manned by a single crew member sitting on motorcycle-style saddle. The driver could peer out into the battlefield through a narrow viewing slit and fire a single machine gun through a slot underneath the viewport.

A two-stroke 25 horsepower piston engine drove the bizarre conveyance, which was steered by a runner wheel on a tail extension which also must have contributed to stability. An article in Russian Popular Mechanics estimates the 1.8 ton Kugelpanzer wasn’t likely to win any races, rolling at a brisk jogging pace of 5 miles per hour.

The Kugelpanzer can now be seen at the Kubinka Tank Museum outside Moscow (check out the image here), stripped of its internal components and designated only as “Object 37.”

What on Earth was this vehicle intended to do? The plaque at Kubinka states the Kugelpanzer was intended as a reconnaissance vehicle.  A single machine gun and five millimeters of armor certainly was not going to make a major impression on the battlefields of World War II, so a reconnaissance role might make sense if one overlooks the vehicle’s low speed. Other light combat tasks proposed for the vehicle include artillery observation and cable-laying.

One author speculates to the contrary that the Kugelpanzer might have been conceived as a suicide vehicle for ramming into enemy troops and tanks. Certainly, the Japanese deployed a number of specialized suicide weapons, such as the Kaiten manned torpedo, the Ohka rocket-powered flying bomb, and Shinyo motorboat units.

However this theory does not sit well with the German origin of the vehicle. True, Nazi Germany flirted with a number of weapons that were practically suicidal by the end of the war—particularly their own human torpedoes, which had an 80% fatality rate for the pilots. However, after developing a manned version of the V-1 “buzz bomb” called the Fi-103, war production minister Albert Speer persuaded Hitler to cancel the program on the grounds that suicide attacks were not part of Germanic warrior culture.

Thus, the Kugelpanzer was likely designed with some other purpose in mind. After all, the Nazis transferred incredible quantities of technology to Japan on submarines during World War II, including impractical designs such as the Me 163 Komet rocket fighter.

In theory, large-diameter wheel designs benefit from low ground pressure and center of gravity, and excellent characteristics for climbing over vertical obstacles and traversing ditches. Similar rolling tanks were proposed but not built in Germany, Russia and the United States, such as the Texas Tumbleweed tank showcased in a 1936 issue of Popular Mechanics. For this reason, the Kugelpanzer’s combination of low speed and good all-terrain ability might have lent it more to serving as an infantry support vehicle rather than a scout.

In fact, there are some precedents that were actually constructed, including the German World War I Treffas Wagen. Completed in February 1917, it sported enormous wheels 3.35 meters in diameter that sandwiched a narrow armored hull mounting a 20 millimeter cannon on the front and machine guns on the side for sweeping out trenches as it rolled over them. Two runner wheels at the rear were used for steering, giving it a bizarre 2x2 format. The 18-ton beast was passed over in favor of the A7V tank, which was produced in small numbers and saw action against British armor in 1918. The Treffas-Wagen, on the other hand, was scrapped in order to recover the steel.

An even larger rolling tank straight out of Star Wars is the 40-ton Russian Tsar tank built in 1915, which used 9-meter diameter tricycle wheels instead of caterpillar treads. The 12 meter-wide monster was intended to mount multiple cannon turrets, but development was abandoned after the 250 horsepower motor proved to be too underpowered for cross-country mobility.

However, the total lack of records regarding the Kugelpanzer confines historians to the realm of conjecture. Nonetheless, the Nazi rolling ball tank illustrates how bizarre science fictional concepts sometimes came closer to becoming a reality than one would think.