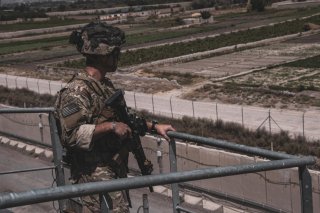 Sanaullah Ghafari, the mysterious leader of the Islamic State’s “Khorasan Province” (ISIS-K) within Afghanistan, now has a $10 million bounty on his head.

The announcement was posted on Monday through the “Rewards for Justice Program,” a bounty system conducted under the aegis of the State Department. It stated that Ghafari, also known as “Shahab al-Muhajir,” was “responsible for approving all ISIS-K operations throughout Afghanistan,” implicating him in the suicide attack on the Kabul airport in August 2021 that killed thirteen U.S. soldiers and nearly 200 Afghan civilians.

Ghafari was described by others within ISIS-K as an “experienced military leader” involved in the planning of the group’s complicated suicide attacks, according to the announcement.

The Kabul airport attack was the deadliest single attack on U.S. security forces within Afghanistan since 2011 and outstripped all American casualties in the country in 2020. A military investigation found that the bombing was likely conducted by a single individual who detonated a large suicide device within the packed crowd.

In retaliation for the attack, the United States launched a drone strike that was initially claimed to have targeted ISIS-K fighters involved in planning an attack. However, it was quickly revealed to have killed ten Afghan civilians, including a civilian aid worker and several of his children. The military later apologized for the strike, although it decided not to punish anyone following an internal investigation.

Ghafari’s early life and activities in Afghanistan prior to 2020 are poorly documented. The Rewards for Justice announcement indicated that his birth year was 1994, making him twenty-seven or twenty-eight years old. It is also suspected that he might have been a member of Al-Qaeda, which continues to operate within Afghanistan and Pakistan, or of the Haqqani network, an influential hard-line faction within the Taliban. Some reports suggest that he and other ISIS-K members continue to operate within the Taliban.

Ghafari was added to the United States’ list of “specially designated global terrorists” in November 2021, alongside Maulawi Rajab Salahudin, a senior commander within ISIS-K, and Sultan Aziz, the group’s spokesman.

The Rewards for Justice Program was established in 1984 and is operated by the State Department’s Bureau of Diplomatic Security. The program’s financial incentives reportedly led to the capture of Ramzi Yousef, who masterminded the World Trade Center bombing in 1994, and Ahmed Abu Khattala, one of the leaders of the attack on the U.S. Embassy in Benghazi, Libya in 2012.

The largest reward currently offered under the program is a $25 million bounty for information on the location of Ayman al-Zawahiri, an Egyptian doctor who has led Al-Qaeda since the death of Osama bin Laden in 2011.