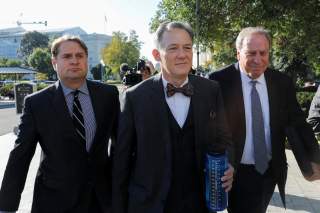 A senior State Department official reportedly told Congress this week that an aide to Joe Biden rebuffed him in 2015 when he raised concerns over Hunter Biden’s position on the board of Burisma Holdings, the Ukrainian natural gas company.

George Kent, the deputy assistant secretary of state for European and Eurasian affairs, told lawmakers in a secret deposition Tuesday that he was concerned that Hunter Biden’s links to the controversial company would undercut U.S. efforts to fight corruption in Ukraine, a source familiar with his deposition confirmed to the Daily Caller News Foundation.

The Washington Post first reported that Kent testified about his concerns over Hunter Biden’s link to Burisma and his interaction with a Joe Biden aide.

Kent, whose portfolio includes Ukraine, also said that he was worried that Ukrainians would view Hunter Biden as a point of access to his father.

Hunter Biden joined the board of Burisma in April 2014. At around the same time, former President Barack Obama tapped Joe Biden to work on rooting out corruption in Ukraine, which had just overthrown its president, Viktor Yanukovych.

Kent said a Biden aide told him that the vice president was unable to deal with the concerns about his son because he did not have the “bandwidth” to do so, people familiar with his testimony said according to The Post.

Kent told lawmakers that he raised concerns about Burisma to officials at the U.S. Agency for International Development in 2016, two sources told the DCNF. Kent spoke at length about his concerns about corruption at Burisma during his deposition, the sources said.

House Democrats invited Kent and other diplomats to testify this week as part of an impeachment inquiry into President Donald Trump’s actions toward Ukraine. At the center of the inquiry is Trump’s July 25 phone call with Ukrainian President Volodymyr Zelensky.

Kent’s testimony seemingly adds credence to Trump allies’ quest to investigate the Burisma-Biden connection; however, the career diplomat also told lawmakers that he was concerned at Trump lawyer Rudy Giuliani’s involvement in the matter.

Giuliani, who is reportedly under investigation for his Ukraine work, worked closely with a small group of Trump administration officials and diplomats to push the Ukrainians to open investigations into Burisma, as well as into whether the Ukrainian government meddled in the 2016 election.

Democrats have accused Trump of abusing his power by pushing Zelensky to open politically charged investigations and questioned whether he threatened to withhold $391 million in military aid from Ukraine as a quid pro quo for the probes.