Statue of Theodore Roosevelt to be Removed in New York City 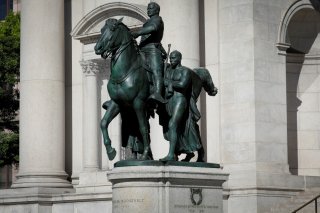 Cancel culture has claimed another victim in the Big Apple. On Monday, the New York City Public Design Commission voted unanimously to relocate the statue of President Theodore Roosevelt from its current position in front of the American Museum of Natural History on the city’s upper west side to an institution dedicated to the life of the American statesman.

An exact institution hasn’t been named and discussions about the statue’s ultimate destination are yet to be determined, The New York Times reported.

The vote followed years of protests, as well as adverse public reaction over the monument, which shows Roosevelt on horseback leading an African man and Native American man in full headdress who are following on foot. The depictions have been called racist.

“The American Museum of Natural History has asked to remove the Theodore Roosevelt statue because it explicitly depicts Black and Indigenous people as subjugated and racially inferior,” explained New York City Mayor Bill de Blasio. “The City supports the Museum’s request. It is the right decision and the right time to remove this problematic statue.”

The work, by artist James Earle Fraser, was commissioned in 1925 as part of a larger effort to honor Roosevelt, who was also a governor of New York, a highly dedicated U.S. Army volunteer who famously fought in the Spanish-American War, a naturalist and an author of natural history works.

Sam Biederman, chief of staff of the New York City Parks Department, said the statue “was not erected with malice of intent” during Monday’s meeting. However, he agreed that the subject matter and content “supports a thematic framework of colonization and racism.”

The push for the statue’s removal actually began to pick up steam in 2017, following the violent white supremacist rallies in Charlottesville, Virginia. A Mayoral Advisory Commission on City Art, Monuments, and Markers to address the future of the city’s divisive statues was called out by de Blasio, who in 2018 cast a tie-breaking vote to keep the statue where it was.

However, last June museum officials again proposed removing the statue. The museum is on city-owned property and de Blasio then reversed course and said he supported its removal.

“The understanding of statues and monuments as powerful and hurtful symbols of systemic racism became even more evident in the wake of the movement for racial justice that emerged after the murder of George Floyd,” said Dan Slippen, vice president of government affairs at the American Museum of Natural History, during Monday’s meeting before the final vote. “It has become clear that removing the statue would be a symbol of progress toward an inclusive and equitable community.”