Stealth Is Dead! Stealth Fighters and Bombers Are Unstoppable! (Which Is It?) 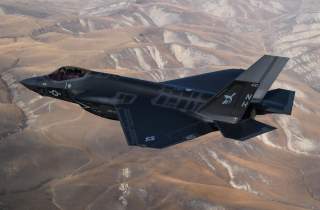 The U.S. military is betting hundreds of billions of dollars—in essence, its whole air-power investment—that detection-dodging stealth works … and will keep working for many decades to come.

(This article by Joseph Trevithick originally appeared at War is Boring in 2014.)

So if Sutyagin is absolutely right, America could be in big trouble. The roughly trillion dollars Washington has spent designing and building F-117s, B-2s, F-22s, F-35s and new Long-Range Strike Bombers since the 1970s has been a waste. And the United States is about to lose its aerial advantage.

At least, that’s the simplistic reading of stealth and counter-stealth in today’s warplane development. And make no mistake, Sutyagin’s argument is simplistic.

In truth, the Russian expert’s claims aren’t particularly new. And there’s no reason to think that better radars are about to render radar-evading warplanes totally obsolete. Emphasis on totally.

Again, there’s nothing particularly new about that. Stealth has never been perfect. It’s not perfect today. It won’t be perfect tomorrow. But it still matters.

The core of the alleged former spy’s recent article — published by the U.K.’s Royal United Services Institute, where Sutyagin is a fellow — is that “low-band” or “low-frequency” radars are quickly getting a lot better at finding radar-evading aircraft.

But Sutyagin admits up front that these sensors have been around for more than 80 years. Indeed, reports suggest that Serbian troops deployed this type of equipment to shoot down a U.S. Air Force F-117A stealth fighter-bomber 15 years ago.

Military officials around the world warned about the “limits of stealth” — that’s also the title of Sutyagin’s article — before and after Serbia shot down the F-117 during NATO air raids on the rogue country in 1999. Every air arm working on new stealth planes is fully aware of the low-band radar problem.

Are these air forces wasting their time, effort and money? Or do they know something Sutyagin doesn’t know … or won’t admit?

For his part, the Russian expat seems to suggest that Western aircraft manufacturers have been oblivious to the low-band threat. But it’s hard to ignore a possible nationalistic prejudice in his assessment. At times, Sutyagin’s essay in RUSI’s Defense Systems reads like an advertisement for Russian arms manufacturers.

“Unlike Western states, Russia has been constantly developing low-band radar technology since 1930s and has achieved impressive results,” Sutyagin expounds. “The air-defense detection systems currently marketed by Russian producers represent a serious potential challenge to Western air power in many parts of the world in the future.”

Here’s the truth. Yes, low-band radars can detect very small objects or tiny individual parts of larger objects—for instance, protrusions on a stealth jet’s airframe. Experts including Aviation Week’s Bill Sweetman have criticized the F-35 for its lumpy, bumpy fuselage, which could make the jet easier to find.

Low-band radar’s special sensitivity represents an important capability for any country trying to detect its enemy’s stealth planes. But for a long time, radar operators couldn’t take full advantage of this capability. Historically, sensor operators had a hard time picking out stealthy jets from among the clouds, rain drops and other “clutter” that the low-band radar tend to alsodetect.

That’s becoming less of a problem. Indeed, that improvement is the crux of Sutyagin’s argument. He explains that today’s powerful computers can help sort through all the extra radar “noise” and find specific targets.

Now, Sutyagin’s conclusions aren’t wrong, but they also don’t exist in a vacuum. Every new military airplane gets introduced into an ever-changing environment of countermeasures and counter-countermeasures. That’s been the case since the dawn of military aviation more than a century ago.

Yes, counter-stealth tools have been improving all over the world for some time now. Besides low-band radars, Moscow, Beijing and Washington are also experimenting with long-range infrared sensors as alternatives to radars, for example.

For that reason, the Pentagon actually isn’t counting on stealth alone for its air-power edge. American officials definitely worry about how the F-35 and other new planes will fare against state-of-the-art air defenses.

It’s not for no reason that the U.S. Navy is taking its time acquiring stealth fighters, and is instead focusing on building more and better EA-18G electronic-warfare jets that can jam enemy radars instead of avoiding them.

Likewise, consider Washington’s renewed interest in extremely long-range, fast-flying hypersonic weapons. These super-fast weapons could help make up for the decreasing effectiveness of stealth. An attacking warplane wouldn’t need to fly so close to enemy radars if it could simply attack from long range with a weapon that’s really, really hard to intercept.

Even aging and portly B-52 bombers—which are anything but stealthy—could lob hypersonic projectiles at targets from hundreds or thousands of miles away. The speedy missiles could zip right through enemy defenses.

In theory. In reality, the Americans—as well as everyone else—have struggled to get hypersonics to work. Just like it’s hard getting stealth to work. And just like better sensors also require intensive development and investment over many decades.

Perhaps most importantly, Moore’s Law—the idea that computing power doubles every two years or so—has never been repealed, so to speak. The fact is, stealth like any advanced technology was always bound to face challenges from any number of other technologies, particularly those that hinge on improvements in computer processing.

But future plane designs will still incorporate stealth features, even if those features don’t represent a major advantage. Stealth might not be a panacea, but having no stealth at all just might be aerial suicide. New sensors work even better again non-stealthy jets than they do against stealthy ones.

Even the Navy, with all its skepticism regarding radar-evasion, has added some stealth features to its latest F/A-18E/F fighters, including special air inlets that are harder to spot on radar.

Stealth is becoming as much a standard fit for advanced military aircraft as radios or radars are. Sutyagin is right that radars are getting better. Sutyagin is wrong that improving sensors alone will change aerial warfare.