Stealth Does Not Mean Unstoppable: Back in 1999, a U.S. Stealth Fighter Was Shot Down 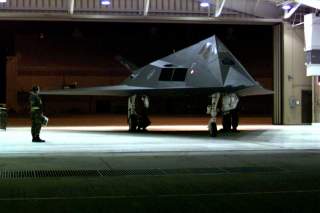 The MiG-29 (NATO reporting name: Fulcrum) created a sensation when it became the first Soviet combat aircraft to be displayed at a western air show. By the end of the 1980s it became both one of the Soviet Air Force’s main fighter types and one of the Soviet export bestsellers; nearly one-third of the 1,500 or so ‘first-generation’ Fulcrums built up to 1996 were exported and the type saw service with 25 nations around the globe.

Though primarily a Cold War warrior, the MiG-29 had its share of ‘hot wars’, such as the First Gulf War in 1991, the Ethiopian-Eritrean border conflict of 1999, and the NATO intervention in Yugoslavia in 1999. According to Russian propaganda, in the latter conflict a Federal Republic of Yugoslavia Air Force (FRYAF) MiG-29 gained the distinction of shooting down an F-117 stealthy fighter-bomber.

The Balkan Peninsula began a period of turmoil in summer of 1991, when the former Yugoslavia split into six independent republics. Following the loss of Slovenia, Croatia, Bosnia and Herzegovina, and Macedonia, Yugoslavia was reduced to the state of Serbia and Montenegro. The subsequent subjugation of Kosovar Albanian population perpetrated by Serbian Nationalists culminated into Slobodan Milosevic’s campaign of ethnic cleansing.

Since Belgrade refused the deployment of peacekeepers inside Kosovo, NATO had no choice but use the force and a plan was developed to build up the coalition that would have forced Serbia to give up control over Kosovo.

On Mar. 27, 1999 a U.S. Air Force (USAF) F-117A Nighthawk fighter-bomber (82-0086/’HO’) involved Operation Noble Anvil (the name given to the US portion of OAF) – a 49th Fighter Wing/8th FS ‘Black Sheep’ aircraft operating from Aviano AB in Italy – was shot down 30 km (25 miles) north-west of Belgrade. As told by Yefim Gordon and Dmitriy Komissarov in their book Mikoyan MiG-29 & MiG-35, the aircraft had the name of pilot Capt. Ken Dwelle painted on the canopy frame, but was actually piloted by Lt.-Col. Dale Zelko, who ejected and was rescued by a USAF combat search-and-rescue team.

NATO spokesmen claimed the loss was caused by poor weather or mechanical problems, but later Zelko himself confirmed the missile ‘kill’. In May 1999, however, the Russian MoD daily Krasnaya Zvezda reported that the supposedly invulnerable stealth aircraft had been downed by a MiG-29 flown by Lt.-Col. Gvozden Djukic. According to the story, Djukic had spotted the enemy aircraft at dusk 1.5 km (0.9 miles) ahead while flying a combat air patrol mission along Serbia’s western border, recognising it instantly as an F-117 by its distinctive shape, and attacked it with IR-homing missiles. The fighter-bomber started disintegrating after being hit by the first missile and the pilot ejected right away.

Russian media quoted Djukic as saying: ‘I felt as pleased as an Indian who had just taken a scalp, or even more. Capt. Ken Dwelle probably did not know we were hunting for him when he flew to wreak death and destruction on our cities. He also hadn’t heard of our proverb: “A black sheep is a bad sheep”. Mr. Dwelle’s squadron was named “Black Sheep”; perhaps the name had played a dirty trick on him!’

In reality, however, the FRYAF had no pilot by that name. The truth is that the F-117A was shot down by a Soviet-made S-125M Neva-M SAM (NATO codename SA-3 Goa); ‘Gvozden Djukic’ was the nom de guerre of Col. Zoltan Dani, the CO of the SAM unit which scored the ‘kill!’