Stealth on Steroids: How the B-2 Bomber and F-35 Will Get Even Deadlier 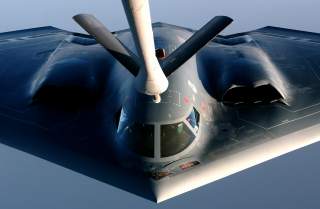 Additional computer-based B-2 upgrades include the now-in-development Defensive Management System, an emerging sensor system engineered to identify the location of enemy air defenses. This system, called DMS, uses computer empowered sensor technology to inform B-2 crews about where air defenses are. This not only increases mission efficiency and safety but also helps ensure that B-2 stealth bomber missions remain effective and relevant for years to come.​

The Center for Strategic and Budgetary Assessments (CSBA) released a study suggesting the USAF spends more than it should in order to ensure American remains ‘king of the skies.’ It was also suggested that the B-1 Lancer be retired. Once again I feel that I must differ with a group of well-funded subject matter experts - the USAF may not need the Lancer to perform its current mission set; but the USN certainly could use this asset in a sea control mission - especially against the PLAN which is becoming much more assertive especially in the waters inside the first island chain.

Currently, each Lancer can carry twenty-four long-range stealthy anti-ship cruise missiles which can be fired from stand-off locations - locations that can be reached quickly given the Lancer's speed. Operating from dispersed hardened locations across the first and second island chains, the Lancer fleet can hold any ship in the PLAN fleet at risk in hours rather than days. It should be noted that both Russia and the PRC have long range 'ex-bomber' aircraft with long-range anti-ship cruise missiles specifically to deny the USN the capability to employ its carrier fleet.

A secondary mission would be to use the Lancer fleet to each deliver twenty four 2,000 pound precision guided sea mines* to quickly close strategic choke point exists that the PLAN might try to use to escape from its bases inside the first island chain into the Indo-Pacific for offensive operations against the USA and/or its allies. At somewhat more risk, sea mines might be sowed to close down PRC ports to both its naval operations and to its commercial traffic.

Just the credible threat that all waters claimed by the PRC may be mined would likely spike commercial insurance rates on all ships and cargos transiting either to or from the PRC - and no foreign-owned ship is likely to risk damage or destruction to their commercial assets. Such a mining operation will likely quickly shut down the PRC economy - and mines need not even be laid. A submarine torpedoing a naval or commercial ship in waters that have been declared subject to mining would likely be enough to disrupt virtually all commercial traffic. *This 2,000-lb bomb is the Quickstrike-J, which has the JDAM guidance kit attached, a magnetic/seismic sensor fuse, and is commonly called the Skipjack. They mirror the dimensions and weight of their JDAM siblings and have been dropped from the B-1 already.

The computer, called ALIS, makes the aircraft's logistics tail more automated and is able to radio back information about engine health or other avionics.

In the near future, F-35 pilots will be able to leverage AI to control a small group of drones flying nearby from the aircraft cockpit in the air, performing sensing, reconnaissance and targeting functions.

“Pilots rely significantly on procedures to help them manage the complexity of various tasks. For instance, when a fire-light illuminates or another subsystem indicates a problem, pilots are trained to first stabilize the aircraft (a skill) but then turn to the manual to determine the correct procedure (rule following). Such codified procedures are necessary since there are far too many solutions to possible problems to be remembered,” the Chatam House paper writes.

Although built in the 1980s, the B-2 is a digital airplane which uses what’s called a “glass cockpit” for flight controls and on-board systems.

Additional computer-based B-2 upgrades include the now-in-development Defensive Management System, an emerging sensor system engineered to identify the location of enemy air defenses. This system, called DMS, uses computer empowered sensor technology to inform B-2 crews about where air defenses are. This not only increases mission efficiency and safety but also helps ensure that B-2 stealth bomber missions remain effective and relevant for years to come.​