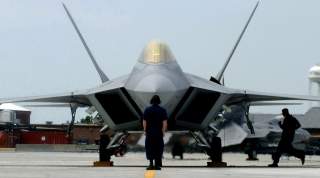 The aircraft’s emphasis on speed allows it to respond quickly—or back out quickly from fights it cannot win. Once the two opposing fighters close to visual range however the Su-57’s combination of maneuverability and infra-red search and track will make it a lethal opponent.

Why Doesn't America Kill Kim Jong Un? The use of the Cray supercomputer helped make the F-22 highly maneuverable, especially at high angles of attack. A key F-22 feature is the use of thrust vectoring in the pitch axis, allowing the aircraft to combine engine power with maneuver at high angles of attack to gain an advantage in dogfights. The large bubble canopy was the largest single of piece of polycarbonate made while the F-22 was in production, and gave the pilot excellent visibility. The combination of maneuverability and visibility mean a pilot can detect and react to visual range threats quickly and decisively.