Stealth Surprise: The F-22 Raptor Has Left the Middle East 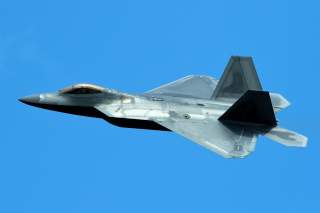 The Pentagon's 2018 edict to boost fighter readiness to 80 percent in 2019 also weighs on the 186-strong Raptor fleet. As of late 2018, the F-22 force reported a 50-percent mission-capable rate. Bringing the Raptors home could help airmen to affect repairs that could improve the reliability of the overall fleet.

AFCENT downplayed the significance of the move. "U.S. Air Force aircraft routinely rotate in and out of theater to fulfill operational requirements, maintain air superiority and protect forces on the ground."

"For years, the air superiority role had been flown by F-22s, which first deployed for combat in 2014 in support of the anti-ISIS fight," Brian Everstine wrote in Air Force.

The Air Force has touted the Raptors as a “quarterback” for strike operations in a complex area that includes anti-aircraft threats from the Syrian military, as well as Russian aircraft operating in the region.

F-22s also have conducted their own air strikes, and escorted USAF bombers on high-profile strike missions in Syria, such as the April 2018 mission targeting Syrian president Bashar Al Assad’s chemical weapons infrastructure, after the regime allegedly used chemical weapons on a suburb of the country’s capital.

"Thanks to its unique fifth-generation capabilities, the F-22 was the only airframe suited to operate inside the Syrian integrated air defense systems, offering an option with which to neutralize [integrated air-defense system] threats to our forces and installations in the region, and provide protective air support for U.S., coalition and partners on the ground in Syria," AFCENT told Air Force following the April 2018 strike.

The F-22 crews returning from the Middle East came home to a very different environment than the one they left.

Prior to Hurricane Michael in October 2018, two squadrons at Tyndall -- the 43rd Fighter Squadron, which is a training unit, and the combat-coded 95th Fighter Squadron -- together operated 55 F-22s.

Michael wreaked havoc on the base, uprooting trees, flattening buildings and ripping the roofs off of hangars.

The redistribution of Raptors into fewer but larger squadrons, while potentially disruptive in the short term, ultimately could help maintainers to improve their readiness rate. "Larger, traditional Air Force squadrons and deployable units provide a better balance of equipment and personnel," the Government Accountability Office explained.

"The reason is the economy of scale," Air Combat Command boss Gen. Mike Holmes told Air Force's Everstine. "If on any given day you only want to commit a certain percentage of your aircraft to the flying schedule, and spend time addressing delayed discrepancies, doing planned and unplanned maintenance on the others. The more you have, the more you can commit a certain percentage of them [to maintenance], … the more sorties you have to train pilots."