Stealth Wins: Why The F-22 Is Able To Fly Without Worry 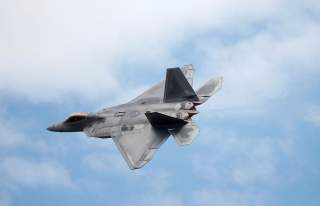 Key Point: The F-22's superiority is computer-based, making it open to being disabled.

The Air Force is working closely with industry partners to strengthen cybersecurity for larger service platforms such as an F-22 or F-35 fighters.

“We have to understand that today’s weapons systems are not operating in isolation. They are operating as part of a netted enterprise. Each weapons system will interface with a broader DOD network,” said Allan Ballenger, vice president of the Air Force division at Engility Corp.

The F-22, often referred to by Air Force developers as an “aerial quarterback,” relies upon data link technology connecting to other aircraft and ground stations as more of the F-22’s technologies and avionics--such as radar warning receivers, mission data files, navigation and target mapping systems--are computer based.

The emerging F-35’s “sensor fusion” is entirely contingent upon modernized computer algorithms able to help gather, organize and present combat-relevant information to a pilot by synthesizing otherwise disparate data  such as targeting, mapping and sensor data onto a single screen.

“The real focus is on the cyber vulnerability assessments across many Air Force platforms, such as command-and-control and battle management systems,” Ballenger said.

Gen. Ellen Pawlikowski, Commander of Air Force Material Command, has articulated seven lines of attack that are essential to better securing networks, data and command-and-control systems. One of the key intiatives informing this effort is an attempt to "bake-in" cyber security provisions into the earliest phases of weapons development.

Part of the focus, Ballenger explained, is to examine trends and current security controls with a mind to the kinds of attacks likely to emerge in the future against IT systems, platforms and networked weapons.

While increased interoperability among networks, weapons and platforms vastly expedites combat efficacy in a wide range of scenarios, Ballenger emphasized that greater connectivity can also increase vulnerability to malicious penetration and server attacks, among other problems.

“We are looking much earlier in the life cycle of these systems with a concern not just about their security but how they interface with other elements of the network. We want to embed cybersecurity earlier in the process,” Ballenger added.

Seeking to emulate threat vectors and anticipate potential methods of attack -- such as how a web-based application could be exploited or the extent to which a trap door may interact with other elements – is an important ingredient in establishing the most effective security protocols.

Also, much of this begins and ends with network IP protocol--codes which can both further enable interoperability between networks and systems while also possibly exposing networks to additional vulnerabilities

“When you have an IP address that is assigned to you, you need to have the appropriate controls in place to reduce that vulnerability,” Ballenger added.

The need for better information security extends from larger systems down to an individual soldier or airmen on a particular combat mission. Tactical Air Controllers are an instance cited where ground targeting technology is used to identify and secure targets for nearby air assets. This kind of air-ground synergy is itself reliant upon computer networking technologies, he explained.“You do not want someone to manipulate data going from airmen on the ground to a shooter in the air,” Ballenger said.

Kris Osborn became the Managing Editor of Scout Warrior in August of 2015. His role with Scout.com includes managing content on the Scout Warrior site and generating independently sourced original material. Scout Warrior is aimed at providing engaging, substantial military-specific content covering a range of key areas such as weapons, emerging or next-generation technologies and issues of relevance to the military. Just prior to coming to Scout Warrior, Osborn served as an Associate Editor at the Military.com. Osborn previously served at the Pentagon as a Highly Qualified Expert with the Office of the Assistant Secretary of the Army - Acquisition, Logistics & Technology. Osborn has also worked as an anchor and on-air military specialist at CNN and CNN Headline News. This story originally appeared in Scout Warrior. This piece was first featured in January 2017 and is being republished due to reader's interest.