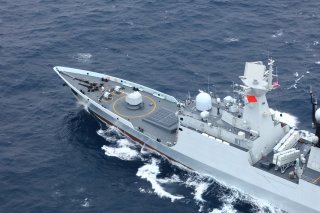 Did a stealthy new Chinese destroyer just sail through the Sea of Japan in a provocative gesture to challenge Japan’s fast-growing effort to build more military strength and challenge Chinese aggression in the region?

It does appear that way, according to a report in the Chinese-government-backed Global Times newspaper which cites a press statement from Japan’s Ministry of Defense. A People’s Liberation Army-Navy flotilla of four warships passed through the Soya Strait from the Sea of Japan with a Type 052D destroyer and a Type 903A supply ship supported by China’s sleek-looking new Type 055 destroyer the Nanchang, according to the Chinese report.

“The Japan Maritime Self-Defense Force on August 24 spotted a PLA Navy flotilla consisting of four warships, namely the Type 055 destroyer Nanchang, the Type 052D destroyer Guiyang, a Type 903A supply ship with hull number 903, and a surveillance ship with hull number 799, which passed through the Soya Strait from the Sea of Japan and then sailed east, Japan's Ministry of Defense Joint Staff said in a press release on August 25,” according to the Global Times.

Alongside the apparent Chinese “gesture” to provoke or send power messages to Japan, the use of the Nanchang seems to be of particular significance. This ship, which one could arguably say rips off some of the visible design concepts of the USS Zumwalt-class destroyer, does appear to have a somewhat stealthy external shape. Most of all, much like the USS Zumwalt, the Nanching has a smooth exterior with few or little protruding structures or sharp edges likely to be picked up by radar. Certainly, a ship of that size could not become invisible, yet radar signature lowering designs might make it look like something else such as a non-military commercial vessel or smaller ship. This is the case with the USS Zumwalt, as a statement years ago from Naval Sea Systems Command said the USS Zumwalt appeared as a small “fishing boat” to radar, a circumstance which of course lends quite an advantage to maritime warfare operations.

Much like the USS Zumwalt, the Nanching has a sloped, smooth hull with few edges, something decidedly stealthier as electromagnetic pings have fewer shapes off of which to bounce and send a return signal to produce a more complete or accurate “rendering.” At the same time, interestingly, the Nanching’s back end does look a little more like a U.S. Flight IIA DDG 51 ship in that it does have some protruding antennas which could be somewhat more detectable or stealthy.

Nonetheless, the Chinese Type 055 is a fairly new ship and the PLA Navy is reportedly building more. The ship is clearly a threat to Japan and other U.S. allies in the region, not to mention a threat to the United States as well. It may not be clear what weapons it fires, yet it is China’s most modern destroyer. What is clear is that the Chinese do appear to be responding in a more provocative or aggressive way to U.S. patrols and Japanese patrols in the region by demonstrating power projection and maritime combat potential.

The other often-discussed dynamic this may also represent is a well-documented and overt attempt by the Chinese to massively expand global presence and influence. China has long been a regional power and has in more recent years been extremely forward-leaning regarding its effort to extend its reach around the globe.