This Is The Stimulus America Needs To Survive The Coronavirus 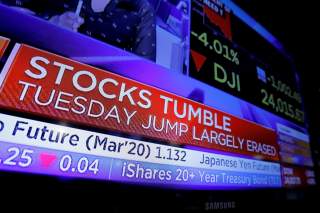 The coronavirus epidemic is starting to wreak major havoc globally, and what began as a health crisis is now quickly spiraling into an economic one. On Monday, the stock market dropped by more than eight percent, trading was suspended twice this week, and markets have continued to fluctuate since. Furthermore, this pandemic is disrupting international supply chains and commodity prices, evidenced by crashing oil prices. The travel industry is also suffering severely. The International Air Transport Association announced an expected global passenger revenue loss of 11-19 percent, equal to $63-$113 billion.

In response, President Trump has signed into law an $8.3 billion emergency spending bill for coronavirus response, and more is expected. What is the best stimulus package at this point?

The White House and Congress are debating a series of stimulus measures, including a payroll tax cut and small business supports. As seen in the table below, a payroll tax holiday is costly and does not provide much relief to the lowest wage workers. Many economists have argued against this measure as an ineffective stimulus tool, and we agree.[1] A recent analysis from the Penn-Wharton Budget Model shows that the bottom 20 percent of households would only see a two percent tax cut, and within this group, only 33 percent would see any cut, since they have neither wages nor self-employment income.

The current concern with the coronavirus epidemic is that it has created uncertainty and widespread panic. The CDC is encouraging people to work from home, avoid public places, and self-quarantine. In response, people are spending less on going out, so would cutting taxes to give people money provide a stimulus? It seems unlikely. A payroll tax cut as stimulus can play a role down the line when the health care crisis has stabilized and we want to alleviate the fear and uncertainty created by the previous few months.

Others are arguing for direct cash transfers to households as a better form of stimulus, because they would be targeted to lower-income households who will face disproportionate troubles. Cash transfers can work as income supports, help workers out of work who fall sick, or help them cover medical expenses. However, here too, there are more targeted ways to address the problem. Even if someone receives a $1,000 check, the cash is not likely to influence their decision to stay home if their employer does not guarantee job protection for those who take time off.

The most effective way to reduce hardship — and to better target those who need assistance — is to adopt emergency paid sick and medical leave for workers who need it, including hourly and part-time workers. Sick leave only provides compensation for salary lost when you take time off, which can keep households financially stable. In the short-term, while the pandemic lasts, this can be funded directly by the government. In the long-run, a social insurance model for providing sick and medical leave can be adopted.

A paid medical leave policy of 12 weeks could cost as little as a third of a percentage point increase in payroll taxes — that’s about $90 per year for the average service occupation worker. Costs would be a fraction of that for a two-week sick leave policy — a small price to pay to ensure that we have proper social insurance policies in place to protect the long-term health and financial stability of all workers. Further, these costs are far lower than direct cash stimulus, which could cost about $350 billion per year. And paid sick and medical leave would solve the problem faster, provide more financial relief and job security, and better prevent future outbreaks.

Furthermore, in order to help individuals who are out of work or who do not have steady incomes, immediate response could involve the government could subsidize the cost of testing and treatment for affected workers. In addition, it is necessary to expand programs like Unemployment Insurance, SNAP, Medicaid, and TANF by waiving time limits and work requirements when economic conditions deteriorate and unemployment increases, since the ability to engage in either training or work-related activity will likely be hindered. Ensuring that there will be no surprise medical billing for treatment and testing is also critical.

The best stimulus package for now involves a multitude of options that can be phased in over time. First, devote a large chunk of federal, state and local money towards testing, treatment, and the development of vaccines to immediately address the coronavirus. These measures will keep Americans safe, slow the spread of COVID-19, and alleviate public concerns. Second, provide government-funded emergency paid sick and medical leave to all workers who need it, with job protection. Third, expand benefit programs and the safety net. Fourth, prepare for a cash stimulus in combination with an expanded EITC and targeted tax credits for businesses, further down the road, thus ensuring hiring and other expenses are not seriously impeded if the economy plunges further. Fifth, move towards a social insurance model for paid sick and medical leave so that future health crises can be contained right at the outset.

Even outlining these steps for now could go a long way towards reducing uncertainty and getting the economy back on track.

[1] There is a difference between employer and employee payroll tax cuts. Employer-side tax cuts would help businesses increase liquidity and prevent hiring slowdowns and job loss more than employee-side cuts.

This article by Aparna Mathur and Erin Melly first appeared at the American Enterprise Institue.