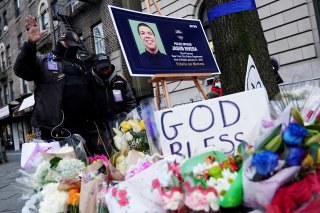 There is a renewed effort in New York State to stop the flow of illegal guns following the shooting death of a 22-year-old New York Police Department officer last week. Gov. Kathy Hochul announced on Sunday that her office's newly-formed task force targeting illegal firearms will meet later this week to determine how to best address the problem.

Officer Jason Rivera was killed on Friday during a domestic call in Harlem. The alleged shooter, Lashawn McNeil, was armed with an illegally-owned Glock 45 handgun equipped with a "high-capacity drum magazine." The handgun was reportedly stolen in Baltimore in 2017. The drum magazine is banned in both Maryland and New York State.

Lawmakers in New York have long complained that firearms are routinely purchased in other states and then illegally make their way to the Empire State. Former New York Mayor Michael Bloomberg lead efforts to ban gun shows in other states – and called for the nation's gun laws to mirror those of the Big Apple.

However, many in law enforcement believe there is another problem, and all too often those arrested with illegal guns don't face serious charges.

"Perps have always had access to illegal guns. That part isn't new," Patrick Lynch, president of the Police Benevolent Association of the City of New York, told The New York Post. "The difference now is that criminals are carrying more firepower and using it more frequently, because the message on the street is that there are no consequences if they get caught. Last night [Friday night] that message cost a hero police officer his life. It has to change, immediately."

It isn't just New York City that has seen an influx of illegal guns. Just in the past week, four people were arrested for trafficking firearms from Arizona to California. Meanwhile, a Connecticut man was arrested on several firearm-related charges after police found him in possession of a cache of illegal firearms as well as a large amount of crack cocaine and fentanyl/heroin.

The four individuals arrested in California had been found with fifteen firearms and thousands of rounds of ammunition, an illegal suppressor attachment, an automatic pistol, high-capacity magazines, and a 3D printer – which was believed to be used to illegally produce firearm parts.

Supporters of gun control would argue that tougher laws on the ownership of firearms are required. However, these recent arrests could serve as a warning that criminals will always find a way to acquire firearms illegally. In all three of these recent incidents, the firearms were illegally modified.

Moreover, it isn't just firearms that are being illegally trafficked, but serious efforts are being made by criminals to increase their firepower. It should be clear that new gun control initiatives won't be enough to stop such individuals – especially as the technology now exists that could easily allow those with a few skills to mass-produce firearms that are completely untraceable.